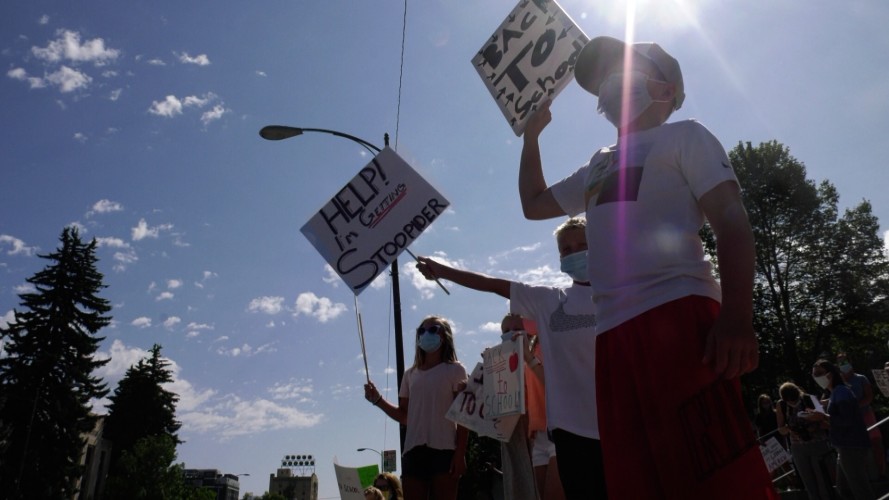 This week, Bozeman Public Schools’ superintendent recommended a way to get kids back in class: have them come to school two days a week and three days, learn remotely.

It was the voices of not only parents but their socially-distanced children as well, rallying against the blended plan that was recommended by Superintendent Bob Connors on Monday.

On Wednesday morning, they met on the steps of the Willson Building, signs in tow.

“I feel that it is very important for our students to be back in school, learning in the classroom,” says Carrie McClaughry, one of the mothers who joined in on the rally.

Wearing masks, Bozeman parents appeared on the steps of the Willson Building, family after family.

They included McClaughry and her two elementary students, each holding signs, wanting more than two days of in-person classes.

“I feel like the students need more consistency than that,” McClaughry says. “Just getting back in the flow of things after being off of school for an extended time is difficult, not only for the kids but for the teachers.”

“You’re sending kids into places where there’s economic stresses from families and they are going to feel that,” says Carolyn Wiseman, another parent.

Wiseman, who has two elementary students and an eighth-grader of her own, was among the rest.

She says she gets distance-learning but looks to Belgrade’s example: more on-campus time, not less.

“I can distance-learn with my children,” Wiseman says. “I stay home with my kids. I can get them a tutor, if need be, because distanced learning is actually proven. Belgrade is going back to school full-time. The county health department, I believe, the last seven day trend showed cases going down and I also don’t think there is a huge amount of transmission between children. You’re exacerbating the education and equality between the lower class and the middle class and it’s just really unfair.”

Others like Heather Klein also joined their kids, citing another issue: lower to middle-class family balance and parents that rely on two incomes.

“Eighty-five percent of parents that were surveyed wanted their kids to go back full time and the fact that Bob Connors is recommending something completely in opposition of the majority is really disappointing to me,” Klein says.

Their parents say they are hoping for a positive step forward Thursday morning.

“Hopefully, there will be a good turnout so that the school board can see and I know a ton of letters are being written.”

The school board still plans to meet again at 9 am Thursday, virtually via Zoom, opening the discussion that could lead to a final decision.

More parents plan on returning for another rally in the same place starting at 8 a.m. Thursday.