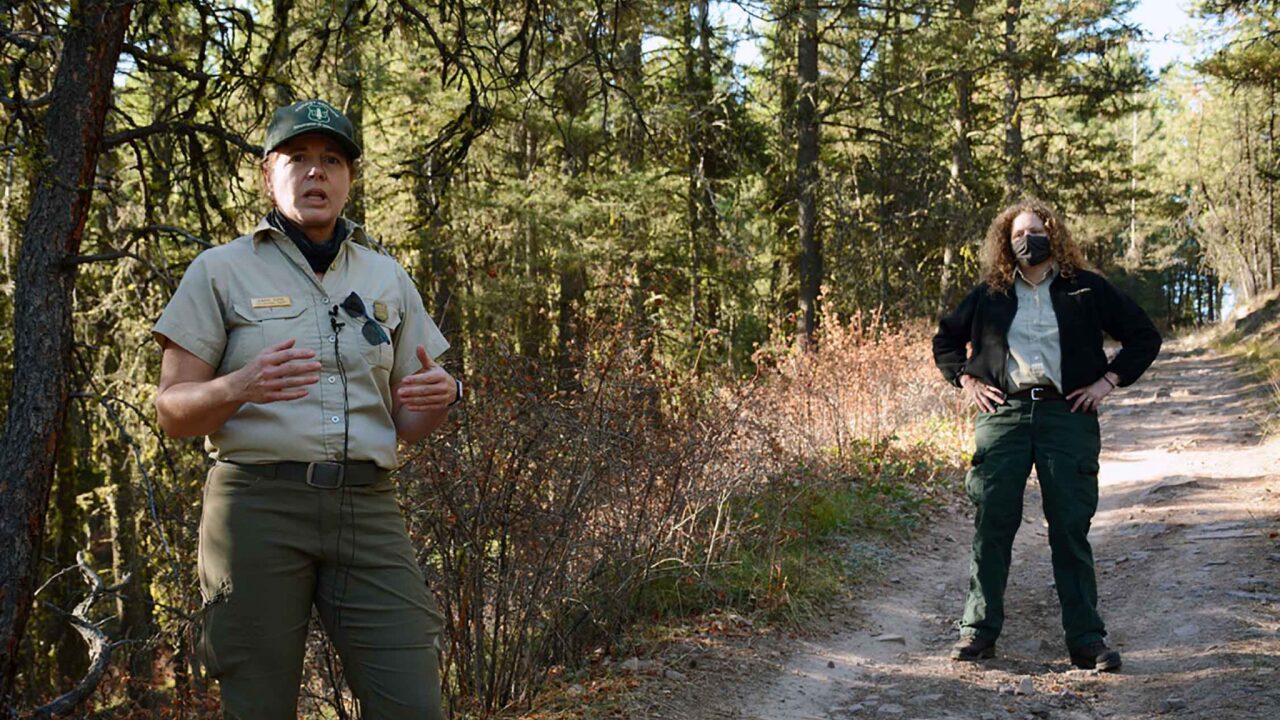 Compared to towns in California and Oregon, Missoula was lucky this summer not having any serious nearby wildfires. But with a warming climate, it’s not a matter of “if” but “when,” so the Lolo National Forest is proposing a large treatment project on the suburban forest to reduce wildfire risk in the Five Valleys region.

On Wednesday morning, on the upper part of the Blue Mountain Recreational Area, U.S. Forest Service silviculturist Sheryl Gunn walked along a dirt road pointing up at all the mistletoe infestations in the Douglas fir that grows thicker in the upper sections of forest.

Mistletoe is a plant parasite that causes trees to grow a lot more foliage on the branches it infects, giving the branch a “witch’s broom” appearance. While the growth is not good for the tree, it can become an additional hazard if a wildfire roars through.

The tree has more to burn, and if there’s a stiff breeze, all the extra branches in the witch’s broom can turn into airborne firebrands that can land on houses as far as a mile away, setting them alight. That could threaten a number of Missoula homes, just as it has in California.

The mistletoe and denser forest stands create a greater wildfire hazard near the top of Blue Mountain than at the bottom where stands are more open, partly due to thinning.

That higher hazard is why Blue Mountain is one of the priority areas in the Wildfire Adapted Missoula project that the Missoula Ranger District has just proposed.

The project area includes almost 159,000 acres of National Forest land and extends south of Lolo, east to Turah and Gold Creek, and northwest to Frenchtown and Evaro Hill.

But not all the national forest land will be treated. That would take a lot of time and money. More importantly, it’s more effective to focus on areas of high risk. No point treating a fairly wet or previously burned area farther away from Missoula when there’s a heavily wooded spot right next to town.

District Ranger Jennifer Hensiek wants to focus on high-risk areas like Blue Mountain but she needed to know where they are.

That’s where it helps to be in Missoula, which has top-notch wildfire experts and reams of data, Gunn said. Scientists designed a model and assembled all kinds of data that could contribute to wildfire intensity and probability, including weather, topographic information, vegetation loads and past fire behavior.

For example, most of the time, winds blow out of the west, so fires on the west side could be a bit more hazardous for Missoula. But, Hellgate winds from the east could still wreak havoc.

So the proposed project has a map with several red polygons created by the model, indicating areas of the highest wildfire risk. Those are the areas proposed for treatment in this project. And because it’s the result of computer modeling, the Lolo NF has been able to put it all online for people to explore in an interactive story map.

“Some areas around Missoula are riskier than others. Where we have low to moderate risk, let’s keep that,” Gunn said.

But with places like Blue Mountain, where large Douglas fir are bunched together, hand-thinning can’t really be done.

“When we want to reduce risk and hazard where it’s the highest, the highest is where trees are like this,” Gunn said pointing to the lodgepoles. “These are too large to treat by hand, so we’d want to use some kind of mechanized means to change the fuel complex so it wouldn’t support really intense crown fires.”

The proposal would treat almost 1,700 acres using machine logging and burning, with an additional 856 acres of hand thinning and incidental logging.

The Forest Service also wants to log or thin trees along 108 miles of road – totaling about 4,000 acres – throughout the project area to create fuel breaks 150 feet to 400 feet wide. Wildfire Adapted Missoula coordinator Michael Albritton said the fuel breaks would give fire crews safe places to anchor off while containing a wildfire, and they’d allow safe evacuation routes from a fire that might be throwing off fire brands.

“This is all intended to be very transparent so we can look that these things together,” Gunn said. “We want to engage more on the mechanized piece because people said, ‘That’s where we want to talk about the details.’ We’re trying to learn from the way the Missoula community has engaged with us in the past and move forward together because this is a community problem.”

Accordingly, each landowner needs to do their part on their own property to reduce wildfire risk ahead of time. If they don’t, it could harm others, said Missoula Emergency Management director Adriane Beck.

For example, the recent Bridger Foothills Fire burned 8,224 acres near Bozeman but only 17% was Forest Service land. The rest was private. Beck pointed to all the houses nestled in the trees along O’Brien Creek, which sits just below the Blue Mountain Recreation Area.

“We can rely on the Forest Service, we can rely on our state agencies to do work on their land, but if we don’t have work being done on private property it really isn’t addressing the risk that we face,” Beck said. “We need that all-hands, all-lands approach. When we have a project like this going on, it enables us to engage the adjacent community to have them do the necessary work for home-hardening and the important work in their home ignition zone. So when those embers showers do come from the fire that’s going to happen, their home is more resilient.”

To learn more about the Wildfire Adapted Missoula proposal, go to the interactive map or read the documents on the Lolo National Forest webpage.