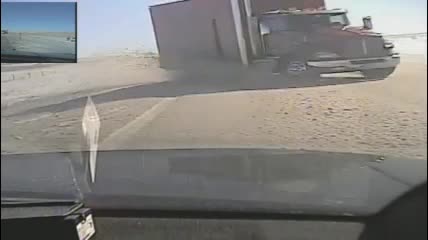 The Wyoming Highway Patrol on Friday released dash cam footage of a crash involving a patrol car that was struck by a commercial truck while on the side of a highway. A trooper suffered minor injuries.

"This video is being released to raise awareness of the hazards emergency personnel deal with daily," according to a patrol press release.

The video from a rear-facing in-car camera shows the incident that happened on Oct. 31 at 1:08 p.m. while the trooper was parked on the side of Interstate 25 south of Wheatland. The trooper had pulled to the shoulder to assist a stranded motorist when the patrol car was struck from behind.

The trooper was inside the patrol car with the seatbelt fastened at the time of the collision.

The commercial truck was traveling too fast for the hazardous road conditions, causing the driver to lose control, the patrol said. The driver was not injured but was cited for careless driving.

"The Wyoming Highway Patrol would like to remind motorists when you see emergency lights ahead, slow down and prepare to stop," the press release states. "The emergency lights are activated to warn the public of an imminent hazard or emergency."