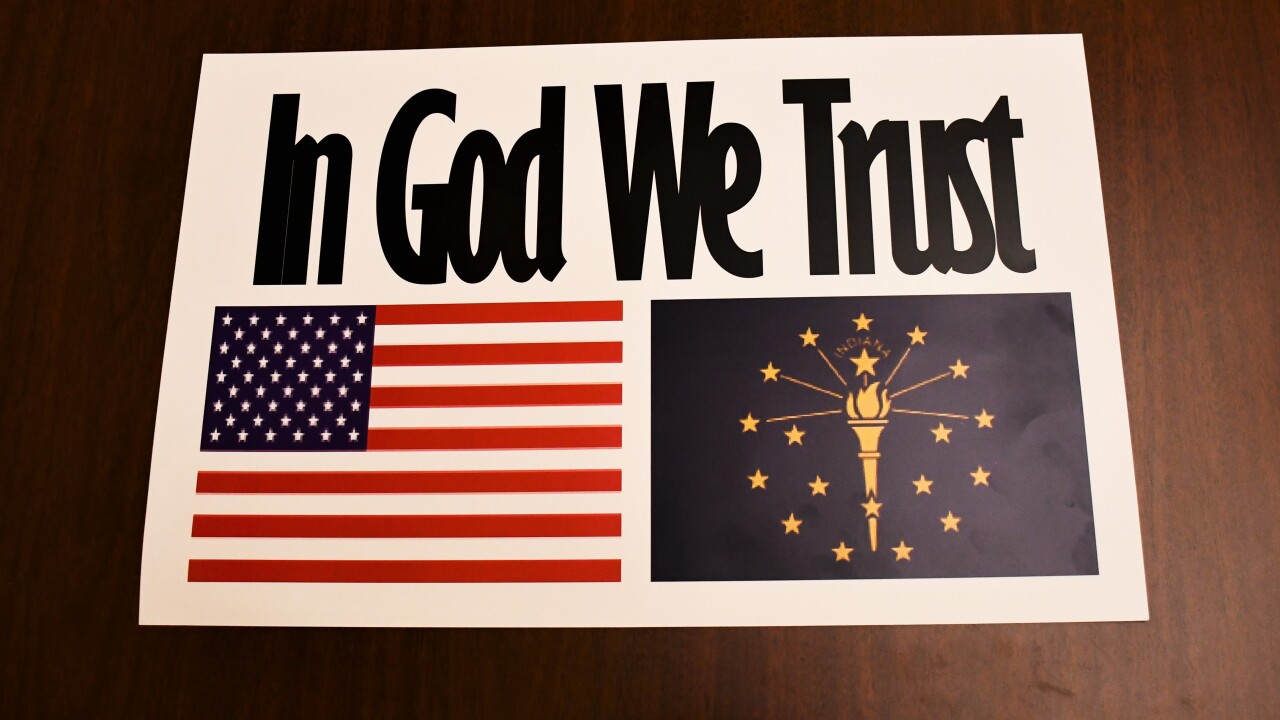 INDIANAPOLIS — An Indiana senator is again trying to get a poster of the phrase “In God We Trust” in every classroom in the state.

Sen. Dennis Kruse, R-Auburn, introduced Senate Bill 131, which mandates each school place a poster or framed photo in every classroom and library that shows the following:

If this sounds familiar, it’s because Kruse introduced a similar bill last year. Last year’s bill also called for every school to include a study of the Bible as an elective course in its curriculum. The 2019 bill was vastly different at the end of the process than the one Kruse initially introduced.

The schools would have to pay for the posters or have them donated.

The bill first came up for a hearing in the Senate Education and Career Development Committee on Wednesday, January 8. In the hearing, Sen. Eddie Melton, D-Gary, asked Kruse if it would be allowed for a school to instead have a sign that said “Allah” or a different name for “God” if that community has more religious diversity.

The public was then invited to testify on their thoughts on the bill. Some organizations present at the hearing showed support — such as Advance America and the American Family Association of Indiana — while others opposed the bill, including the Indiana School Boards Association and the American Federation of Teachers.

Micah Clark with the American Family Association of Indiana said a November 2019 Gallop poll showed that 87% of Americans say they believe in God (the result appears to actually be from 2017). He also said nearly 2 million Hoosiers have an “In God We Trust” license plate.

Sally Sloan with the American Federation of Teachers said the organization would rather lawmakers focus on increasing student learning and funding for schools. She said she believes it’s overregulation, since school corporations already have the right to post the signs if they want.

Kent Morgan, who frequently represents the group Disabled American Veterans, testified in support of the bill. His great-great-grandfather fought in the Revolutionary War, he said. He said U.S. soldiers have been fighting and dying for years for the “In God We Trust” motto and the American flag.

“Once we fail to let these students understand where we came from, we will not have a country, but a country of anarchy,” Morgan said. “Hopefully, you will support this bill.”

Sen. Mark Stoops, D-Bloomington, later spoke about the bill, seemingly in response to Morgan’s comments. He said his grandparents are sons and daughters of the American Revolution.

“My family has fought in the Civil War and just about every war,” Stoops said. “They didn’t fight just for that motto. They fought for the flag and because America was free. I take offense when I see people trampling on the deaths of the people fighting for this flag and what they had to go through to protect the freedoms of every American, not just one particular religious group.”

This story was originally published by Matt McKinney on WRTV.