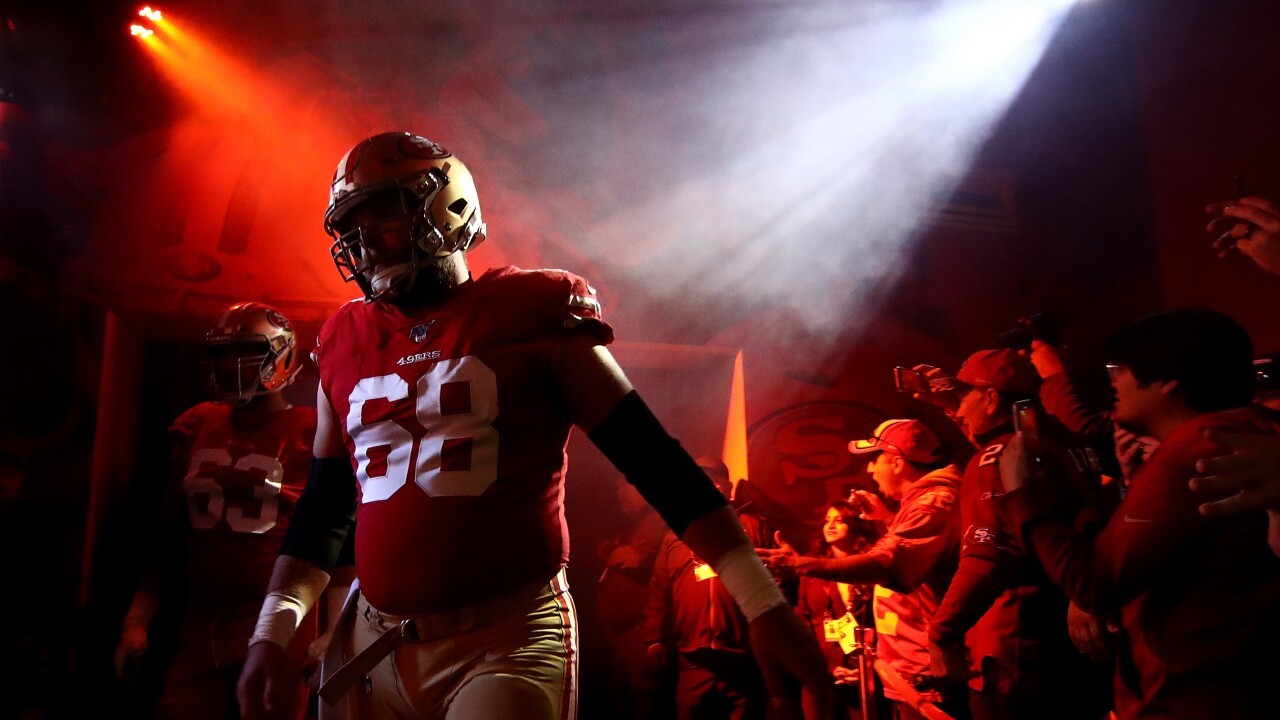 SANTA CLARA, Calif. -- It’s a short list of Montanans who have played in a Super Bowl.

On Feb. 2, Glendive native and former Montana State Bobcat Mike Person will add his name to the list.

“It’s pretty cool to finally be able to be in this position. I don’t know, kind of over the moon about it," Person said in a phone interview with MTN Sports. "Sunday night and (Monday) were pretty surreal sitting there thinking about it. It has sunk in, and trying to figure out all the logistics end of it and all that is a little stressful. Now it’s on to focusing on the football.”

Person is the starting right guard for the San Francisco 49ers, who ran past the Green Bay Packers in the NFC Championship last Sunday The 49ers will meet the Kansas Chiefs in Super Bowl LIV in Miami.

It’s business as usual this week, but next week?

“All I’ve heard is once you get down there it’s absolute chaos," Person said. "We’re treating this like we’re playing this Sunday. We’re going to do our normal schedule and come in and work (Wednesday) and Thursday and Friday. After that, I have no idea.”

After winning just four games in 2018, the 49ers are a bit of a surprise Super Bowl contestant. But they turned it around this year to finish with a 13-3 regular-season record. They won the NFC West and earned home-field advantage throughout the NFC Playoffs.

“Last year we knew we had the building blocks for a really good football team, and we just kind of got hit by the injury bug. The lessons that we had to learn last year, they were huge, especially for our younger guys, because what really impressed me about last year’s team — we went 4-12, but nobody started to pack it in in Week 10 or 11. Everybody kept coming to work and kept trying to get better, and it’s helped us so much coming into this year," Person said.

Person has played a big part in the rebuild. After bouncing around the league and playing for six different teams, Person seems to have found a home with San Francisco. The 49ers originally selected Person in the seventh round of the 2011 NFL Draft. After stints with the Indianapolis Colts, Chiefs, Atlanta Falcons, St. Louis Rams and Seattle Seahawks, Person made his way back to San Francisco in 2018. He signed a new three-year contract in March 2019.

This year, the nine-year veteran started 14 games in the regular season and both of San Francisco’s playoff wins.

The offensive line has helped pave the way for the NFL’s No. 2-ranked rushing offense. They’ve been even better in the postseason, though, rushing for 471 yards in two games. That included a record-breaking performance in the 49ers' 37-20 win over the Packers last week.

"Obviously we wanted to get after them and run the ball, but it’s the NFC Championship game. That doesn’t happen very often like that in that big of a stage," Person said of the dominant performance that saw San Francisco running back Raheem Mostert rush for 220 yards and four touchdowns.

"We were expecting to be pretty balanced coming into it," Person continued. "That’s what I love about (head coach Kyle Shanahan) is, he may have a new take on this offense, on this old-school, outside-zone offense, but down in his heart he’s a run-first guy. He may be this big offensive guru, but he loves running the football. When it’s going, he leans on us and he lets us take over games.

"It all starts with Kyle. Him and (run-game coordinator) Mike McDaniel and our (offensive line) coach John Benton, they all, they put us in the right positions with their game planning and dissecting the other team’s defense throughout the week. We’re not afraid to play any game, you know? … We’ve won any type of way this year. We’ve won without scoring a touchdown, we’ve won scoring 48 points and giving up 46. We’re just a team that we know that we have each other’s backs.

Montana has Person’s back, too. Growing up when Montana was producing NFL players like Shann Schillinger and Colt Anderson, Person dreamed of one day being in this spot.

Now here, he’s thankful for the support he’s received from back home.

“It’s been tremendous. Honestly, it’s been that way throughout my entire career," Person said. "It’s really cool to know that I have so much support back home.”

Head over to MontanaSports.com for more coverage.