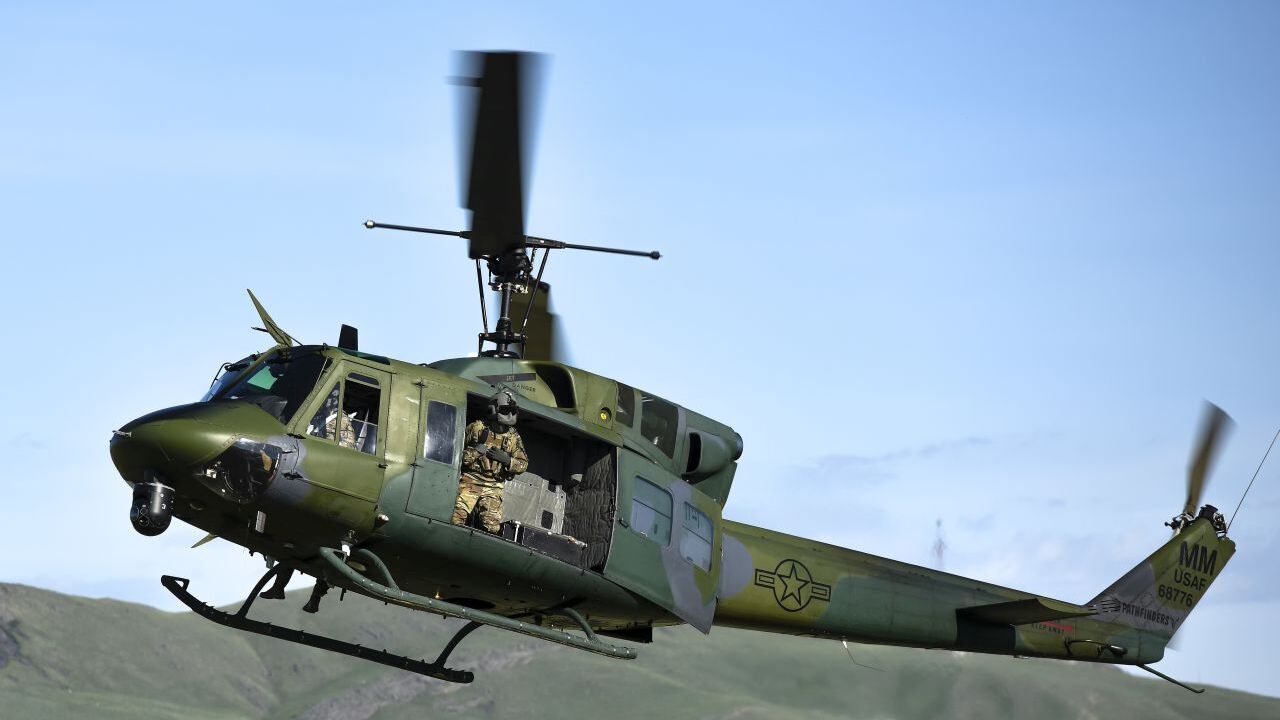 The crew responded to King’s Hill, a local recreation site, to locate and retrieve two snowmobilers who were reported missing after the 341st Missile Wing command post received a call around 5:45 a.m.

The Cascade County Sheriff’s Office requested assistance in locating a 75-year-old and a 71-year-old, with known medical conditions, who became lost during a snowmobiling trip.

Once in the air, the crew’s goal was to search for, and if necessary, recover the missing snowmobilers from the Little Belt Mountains.

“Weather was good on base, but in the mountains, the mountain-tops were obscured by clouds,” said Maj. Jeffrey Miser, 40th HS assistant director of operations. “At high altitudes, the clouds were a factor.”

While the temperature was above freezing at Malmstrom Air Force Base, the search area was almost 10 degrees colder.

Once the helicopter crew arrived at the Little Belt Mountains, they met with CCSO and Meahger County sheriffs at the snowmobile trailhead.

The crew picked up trail groomer personnel, as they were most knowledgeable of the mountain’s terrain, and followed the trails by air in an attempt to locate the missing snowmobilers.

As the trails elevated, the terrain became more and more engulfed by clouds, causing the helicopter crew to divert from the search route.

To combat the low visibility, the aircraft searched below cloud level and followed different water drainages to reach higher altitude as they climbed the mountain.

“The ground search team eventually located the lost snowmobilers - who were in good health – and moved them to lower terrain,” said Miser. “The ground team then heard the helicopter and vectored the crew to the survivors’ location.”

Upon locating each other, the helicopter crew returned the trail groomer personnel to the staging area before resuming recovery of the snowmobilers.

Then, a hoist was used to lower Rohlfing to the survivors to conduct an initial medical assessment: the couple was in good health despite staying overnight in deep snow.

With a combined effort of the multiple state and federal agencies, 40th HS found and transported the snowmobilers to emergency medical personnel for further medical assistance.

“Outstanding job by the 40th HS and the 341st MDG,” said Chief Master Sgt. Ron Harper, 341st MW command chief. “We are extremely proud of our highly-trained personnel with their ability to render aid and provide expedient service to those in need.”

The 40th HS has a proud rescue history and currently conducts search and rescue missions in support of the Joint Chiefs of Staff National Search and Rescue plan.

“We’re thrilled to be good neighbors to our community,” said Col. Jennifer Reeves, 341st MW commander. “We are so proud of the men and women of the 40th HS and the 341st MDG who gladly put their lives on the line to facilitate the rescue of our fellow Montanans.”