Gov debate: Cooney, Gianforte mix it up over … bipartisanship? 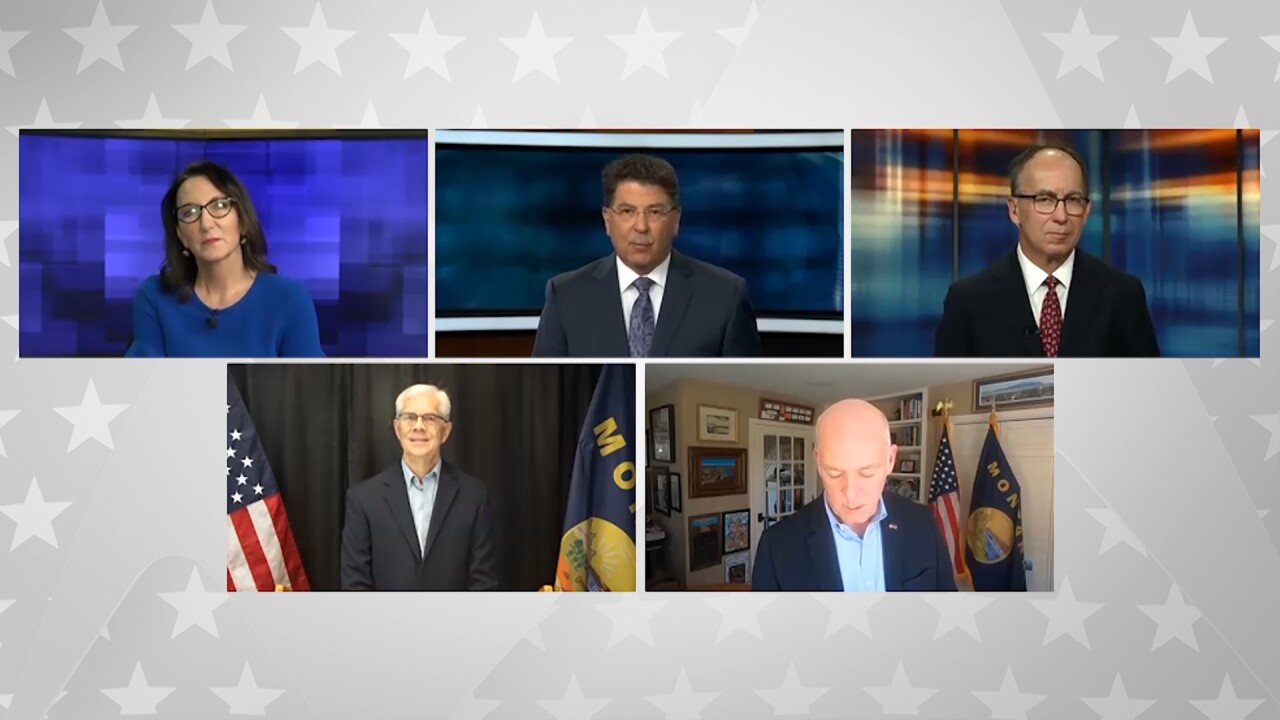 Republican Greg Gianforte and Democrat Mike Cooney squared off in their first debate Saturday night, in the 2020 race for governor.

Montana’s two leading candidates for governor tangled over tax policy, the pandemic, education and public lands in their first debate Saturday, but also spent plenty of time polishing their credentials on something else: Bipartisan cooperation.

“I think when you break bread together, you can find common ground, and I think Montanans share more in common than separates us,” said Republican Greg Gianforte, borrowing a frequent talking point of his Democratic opponent, Lt. Gov. Mike Cooney. “I’m going to turn the governor’s residence into a house of hospitality, to bring people together.”

Cooney, not to be outdone, repeatedly mentioned how he and Democratic Gov. Steve Bullock have worked across party lines at the Montana Legislature to pass key measures like Medicaid expansion and infrastructure spending.

“That’s how we get things done in Montana – by working together,” he said.

But the pair still found plenty to disagree on, including several pointed exchanges where Cooney unleashed familiar attacks on Gianforte, Montana’s current congressman and a Bozeman businessman.

For example, Cooney said Gianforte is no champion of public lands, because he sued the state several years ago to allegedly block access to the East Gallatin River on the edge of his Bozeman property.

Gianforte said no one was denied access and that the lawsuit merely was a way to get the state to the table to straighten out a surveying error.

“Mike Cooney is just trying to mislead you,” he said. “But we need to move beyond that, because we agree. There’s no variance here. We both believe that we should have access to public lands.”

Cooney and Gianforte are battling to become Montana’s next governor, which is an open seat, since Bullock cannot run for re-election because of term limits. Libertarian Lyman Bishop of Kalispell also is in the race.

The race is considered the most competitive gubernatorial contest in the nation this year and polls have shown it to be relatively close.

Gianforte ran for the seat four years ago, losing to Bullock by three percentage points. He then ran for Congress in May 2017, winning a seat vacated when then-Congressman Ryan Zinke left to take a post in the Trump administration.

Saturday’s debate often followed familiar themes in the campaign, with Gianforte saying his business experience and business plan is the best choice to help Montana recover from the pandemic and improve its economic standing in the country.

He also said the record of the Cooney-Bullock administration isn’t always one to be proud of, with Montana having the lowest starting-teacher pay in the country, some of the lowest average wages among the states, and many children in foster care, because of a dramatic increase in drug abuse.

Cooney countered by saying while Gianforte talks a good game, his actions speak louder, with votes in Congress to tear down Medicaid expansion, support of a tax cut that benefited the wealthy and racked up $2 trillion in debt, and support for public aid to private schools.

“My opponent has called public education a monopoly,” Cooney said. “We need to continue to make investments in making our education the best in the world and making sure our kids have every opportunity.”

“I think this is a very clear point of distinction between Mike Cooney and myself,” Gianforte said. “If you want higher taxes, vote for Mike Cooney. If you want lower taxes and no sales tax, vote for Greg Gianforte.”

“When you go to Washington and vote for a bill to give yourself and other millionaires a huge tax break, that’s not fair,” Cooney responded. “And especially when you end up with a bill of $2 trillion, that I won’t have to pay off – my kids will.”

On combatting the Covid-19 pandemic, Gianforte said he would emphasize “personal responsibility” and doing all he could to keep businesses and schools open.

“I think we can do it with effective policy that … protects people on the front line but also gets people back to work,” he said.

Cooney said the governor needs to “follow the science” and that relying on “herd immunity” is the wrong approach.

“We need to remain vigilant,” he said. “We know that science says wearing masks, avoiding large crowds, properly handling hygiene is going to be the best weapon. We need to have healthy citizens if we’re going to have a healthy economy.”

One of the sharpest exchanges came after Gianforte was asked about his assault of a reporter, in Bozeman on the eve of his first election to Congress in May 2017, and whether voters should consider that incident when deciding whether he should be governor.

Cooney accused Gianforte of trying to “lie your way out of it” and said he should apologize now for “lying to the police.”

“That was not my proudest moment,” Gianforte replied. “And I did apologize and I’ve moved forward. And people have seen my record serving this great state.”