Bullock and Daines tear it up in final U.S. Senate debate (VIDEO) 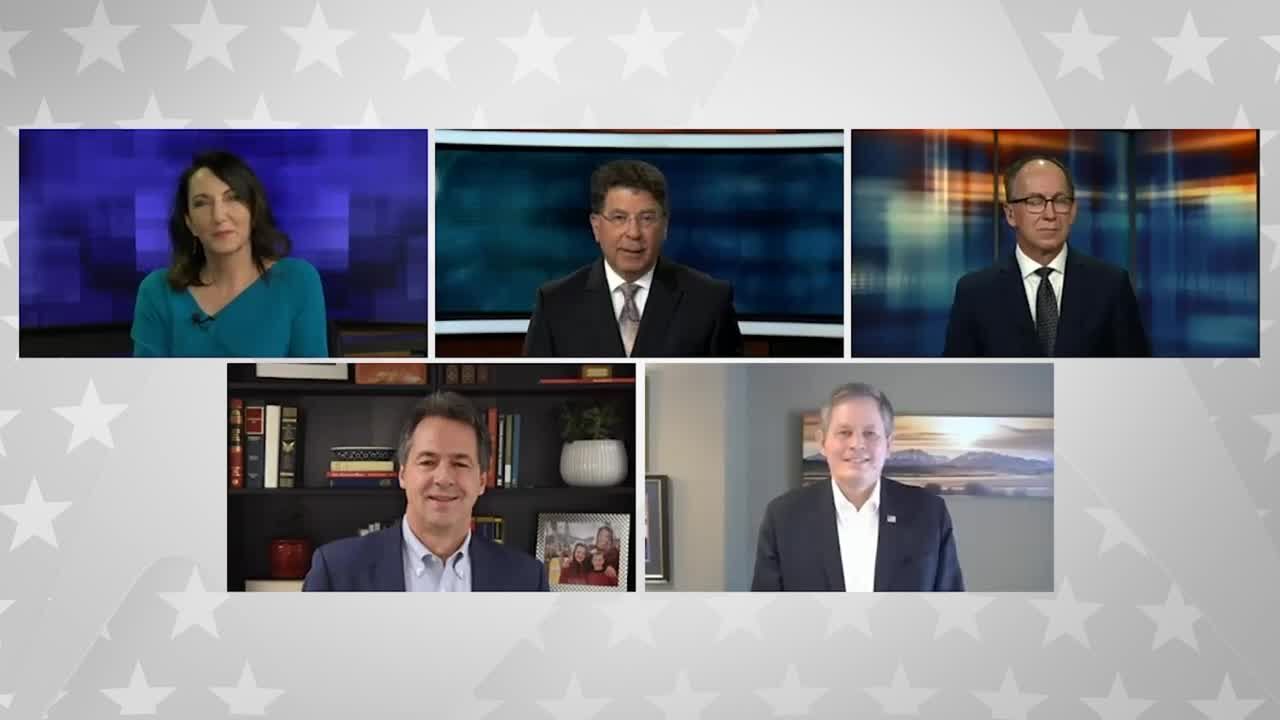 Republican U.S. Senator Steve Daines and his Democratic challenger Governor Steve Bullock engaged in one crackling exchange after another Saturday, in their third and final debate that reflected the high stakes of one of the nation’s top U.S. Senate races.

On everything from the U.S. Supreme Court to taxes to the treatment of women, Daines and Bullock held little back, and clashed in often personal and pointed tones.

“Gov. Bullock has had a repeated pattern of hostility toward women in the workplace,” Daines said, referring to a former Bullock aide fired for sexual harassment last year. “Not only did Gov. Bullock cover it up, but he got him a new job with a position of power with the mayor of New York City … where he victimized women again.”

“I didn’t even know where he got another job along the way,” Bullock replied, referring to the former aide, Kevin O’Brien.

Bullock then turned the criticism back at Daines, and President Trump.

“And for a guy (Daines) who continues to just be mum when his party leader says, `Well, I’ll just grab women by the’ … Well, I can’t say that on regular TV,” he said. “Or continued sexual harassment claims that are brought up, and you don’t say a word along the way.”

The Daines-Bullock contest – which has now become the most expensive race in Montana history, closing in on $100 million in spending -- is one of a half-dozen nationwide where Democrats hope they can pick up a Republican seat and win back control of the U.S. Senate.

Most polls have shown the race to be close, with Daines or Bullock clinging to a narrow lead – although outside handicappers have said Daines remains the slight favorite, in Republican-leaning Montana.

And in Saturday’s debate, the candidates left little doubt that they represent two very different views in the political world.

Bullock blasted Daines for voting to repeal the Affordable Care Act, said Republicans are unfairly trying to ram through a new U.S. Supreme Court justice, and criticized the 2017 GOP tax cuts as a giveaway to the wealthy.

Daines said Bullock is a threat to 2nd Amendment gun rights and wants to “pack” the Supreme Court, is a “lap dog” to Democratic U.S. Senate Minority Leader Chuck Schumer of New York, and that the 2017 tax cut led to unprecedented economic growth – until the Covid-19 pandemic.

“The idea that those who are wealthy should pay a little bit more makes a heck of a lot of sense to me,” Bullock said, when asked whether he favored a plan by Democratic presidential nominee Joe Biden to increase income taxes on those earning more than $400,000 a year. “One of Sen. Daines’ proudest accomplishments was getting through those tax cuts – cuts his party leaders said, literally, `We have to get through to make our donors happy.’”

One of the sharper exchanges came over the U.S. Supreme Court and the upcoming confirmation of Trump’s nominee, Amy Coney Barret, who would succeed the late Justice Ruth Bader Ginsburg. Hearings begin Monday before the Senate Judiciary Committee.

Daines said Democrats would be trying to “destroy (Barret’s) life and career,” and then said that’s “nothing new for Gov. Bullock,” referring to the 2015 departure of then-Lt. Gov. Angela McLean.

“(She) was forced out of office, walked off the job, with no explanation,” Daines said. “I think Montanans deserve to know what happened to Lt. Gov. Angela McLean.”

Bullock ignored the question and criticized Daines for pushing to confirm Barrett right before the election, noting that Republicans had refused to consider then-President Barack Obama’s nominee to a court vacancy in 2016, saying a nominee should not be approved during an election year.

McLean, who has appointed by Bullock as lieutenant governor in 2014, had a falling out with Bullock later that year and quit her job in November 2015. Neither McLean nor Bullock would say publicly what caused the rift.

Bullock did say he opposed confirming Barrett right before the election and that he might consider actions later to make the court “less political,” like adding more justices.

“Steve Bullock just said he’s open to packing the courts,” Daines replied. “That should be a chilling profound moment … That’s a threat to our 2nd Amendment and the very liberties and freedoms we cherish and want protected.”

“You did just pack the court, Sen. Daines,” countered Bullock. “Four years ago you said we should never confirm a justice when people are voting. Let the people decide.”

On the pandemic, Bullock dinged Daines and Congress for “pointing fingers” rather than working to approve another Covid-19 air package, and for giving money to drug companies to develop vaccines or other treatments with no guarantee that those would be available at affordable prices.

Daines said he’s not going to support a package that contains multimillion-dollar bailouts for “liberal states” that have mismanaged their budgets – and that he’s confident that drug companies have agreed to make vaccines available for free.

“I reject the notion that we have to learn to live with (the virus); we have to end it,” Daines said.

Daines also promoted himself as a “job creator,” citing his work for RightNow Techologies, the former Bozeman software firm that created hundreds of jobs in Bozeman and grew to an international company, and said Bullock is a “career politician” who has never created a single job.

The two also had another barbed back-and-forth over the southwest Montana veterans’ home near Butte, which Bullock supported and Daines said he backed, but voted in 2018 against an omnibus federal spending bill that had money for the project.

Daines said he voted no because the bill contained too much “pork” for other projects – and then attacked Bullock for allegedly getting support from actress Jane Fonda, who opposed the Vietnam War in the 1960s.

“If you want to upset Vietnam vets, just let them know that Jane Fonda is one of his biggest fans, who by the way, just this week, said that Covid-19 was a 'gift from God' to the left,” Daines said.

Fonda has not contributed to Bullock’s Senate campaign – but she did give him $1,000 to his failed presidential run last year.