A tasty reopening: Missoula restaurants get back to in-house dining 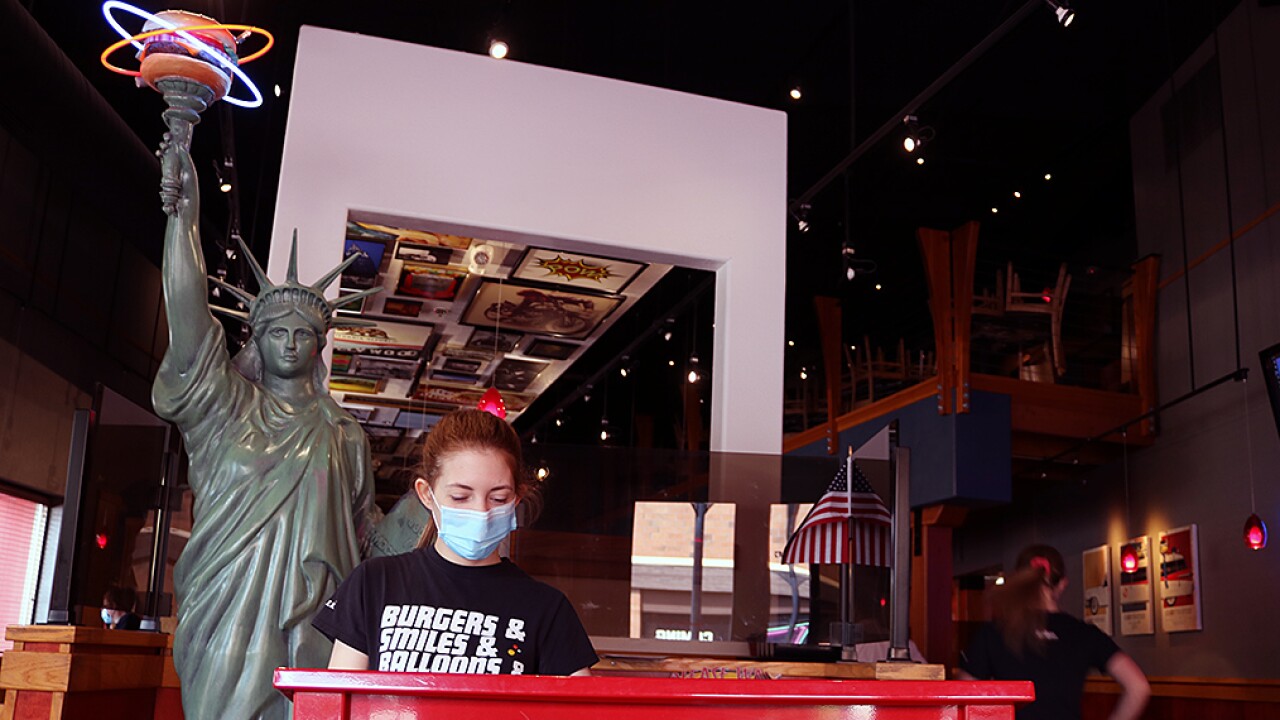 Martin Kidston/Missoula Current
<i>Bailey Hall staffs the counter at Red Robin on Monday, which joined dozens of other local restaurants in opening its doors for dine-in service. Several customers sat for burgers and fries, though they were spaced at different points within the restaurant. </i>

Missoula’s phased reopening took another step Monday that left some sitting for a grilled hamburger with a side of bottomless fries at Southgate Mall, or a burrito wrap and a fish taco at a downtown location.

Whatever the choice of fair, many restaurants across the city opened their doors to dine-in service for the first time since March. Day by day, Missoula’s economy is waking from a deep slumber induced by COVID-19.

“I think we’re doing this in the right way,” said Missoula Mayor John Engen. “Businesses have been incredibly cooperative and thoughtful, and have made a lot of inquiries about the way they can open safely. I think the community cooperation we’ve seen so far will continue through this reopening.”

Billboards along Brooks Street that once read “Closed” and “Stay Safe Missoula” have changed. They now read “We’ll see in you inside” and “Open for dine-in service.”

Most expect consumer confidence to take a little time, though a number of restaurants had patrons seated on Monday afternoon, spaced according to current health codes.

“I actually think there’s some pent up demand for a restaurant meal, being out and about and seeing humans,” Engen said. “Providing everyone does that safely, and I think they will, then generally we’re on the right path.”

Montana Gov. Steve Bullock last month announced his plans to reopen the state’s economy. Many retail stores across the state were permitted to open at the end of April, though the Missoula City-County Health Department postponed that for another week.

But on Friday, local retail stores were permitted to open and many did, though with new measures in place to restrict the number of customers and other distancing measures. Local restaurants followed on Monday, also with new guidelines limiting capacity and seating.

“We can start taking some steps forward,” said Cindy Farr, who is leading the pandemic response for the Missoula health department. “This is going to be a gradual reopening process. These businesses are really trying to limit the number of people in their spaces and promote social distancing so all of us can start moving forward toward a new normal.”

A report released by the Bureau of Business and Economic Research at the University of Montana projected the state will lose 50,000 jobs this year and see personal income fall by $3.9 billion. The same report suggested the northwest region of the state, including Missoula, would see the greatest retraction, shedding 16,000 jobs, or nearly 8.1% of its workforce.

Already, the Kettlehouse in Missoula announced its plans to close its Northside taproom and dismiss some workers, and it cited the pandemic as the reason. It remains unknown how many workers in the service industry will return to their jobs, or how many jobs will be available for them to come back to.

But on Monday, Linnea Mills and Bailey Hall returned to their jobs at the Red Robin. Staff at the popular burger joint wore face masks and rubber gloves. Some went about sanitizing seats and door handles after each customer.

“We looked on our schedule and it said we’ll be getting back to work on Monday,” said Mills. “It’s been a lot of sitting around, not knowing when we’re going to get back.”

Missoula County has reported 41 cases of coronavirus during the pandemic, with the first case reported on March 7. The first local death was reported on April 4.

But no new cases have been reported in more than a week and the number of cases in quarantine has fallen. So too has the number of close contacts being traced by health officials.

“Where we’re at now is a different place than we were a week ago. We haven’t had any new cases in over a week, and our active cases has remained at zero for several days,” said Farr.

“The number of close contacts in quarantine continues to decrease, and our testing capacity and the number of people we can test continues to improve. We are going to see additional cases in Missoula, but we’re in a better position now to identify them.”

Yet a number of challenges remain, including the spring and summer farmer’s markets. Farr said the health department is developing plans on how to allow markets in “the era of COVID-19.”

Other businesses remain closed including hair salons, massage studios and barber shops. Local health officials have said they won’t be permitted to open until Phase 2 of the governor’s reopening, which has no date.

“We’ve heard from a couple of hair salons who are finding it challenging,” said Engen. “The health department is trying to work with them to find ways they can reopen safely.”