But when it comes to key votes before Congress, Daines is not always on board with the president. He has supported Trump on 71 percent of 16 key Senate votes this year, according to data compiled with the political website 538.com.

And as for Montana’s senior senator, Democrat Jon Tester? He has opposed Trump on every key Senate vote so far this year, the same data say.

In Montana’s three-person congressional delegation, the prize for standing most often with President Trump goes to Republican U.S. Rep. Greg Gianforte, who has supported Trump on key votes 97.5 percent this year and 93.5 percent the previous two years.

Daines, who’s up for re-election next year, voted with the president 88 percent of time on key votes in 2017 and 2018 and has an 85 percent rating for his career.

However, this year, Daines has a lower rating primarily due to his opposition on several foreign-policy issues. Here’s a closer look at the votes and ratings for all three delegation members:

Most of Daines’ opposition to Trump on key votes has been on foreign policy, such as Daines’ support to end U.S. military assistance to Saudi Arabian-led forces in the civil war in Yemen — a war that critics have called one of the worst humanitarian crises in the world.

He voted last year and this year for resolutions to end the aid and to override a Trump veto of the resolution in May. The veto override failed.

Daines voted for non-binding resolutions to disapprove of Trump’s plan to withdraw U.S. forces from Afghanistan and Syria, and oppose Trump’s use of national security rationale to impose tariffs.

And, he voted in January for a bill to block Trump’s plan to lift sanctions on three Russian companies allied with Russian President Vladimir Putin. The vote failed and the sanctions were lifted.

Daines also voted in January 2018 against a bill reauthorizing warrantless spying, as part of the Foreign Intelligence Surveillance Act. It passed 65-34 in the Senate.

For the most part, however, Daines has been supportive of the president’ agenda.

In the past 18 months, he has voted for Trump-supported initiatives to restrict abortion, fund the border wall, repeal consumer rules on auto loans, enable short-term health-insurance plans, pass the 2018 Farm Bill, and to confirm cabinet nominees and Supreme Court nominee Brett Kavanaugh.

Daines’ office told MTN News Tuesday that he will “always vote for what is best for Montana, regardless of political party.”

The website 538.com says Tester voted with the president 38 percent of time on key Senate votes in 2017 and 2018, but, so far this year, opposed Trump on all 16 key votes through the end of June.

His votes against the president this year include “no” votes on the confirmation of Attorney General Bill Barr, Interior Secretary David Bernhardt and EPA Administrator Andrew Wheeler this year.

However, Tester did vote Tuesday to confirm Trump’s nominee to be the new U.S. secretary of defense, Mark Esper. The confirmation passed 90-8.

He also voted against Trump on all key foreign-policy questions this year, against border-wall funding supported by Trump, and against a bill to ban federal funds for abortion or health coverage that includes abortions.

Last year, Tester voted with the president on a bills to roll back some regulations on banks, makes changes in federal prison sentencing, and expand private health-care options for veterans.

But he opposed the president on many key items, including confirmation of Kavanaugh to the U.S. Supreme Court, confirmation of several key cabinet members, such as Secretary of State Mike Pompeo, allowing political nonprofits to hide identify of their donors, repeal of the consumer rule on auto loans, restricting abortion, a bipartisan immigration-reform bill, and getting rid of net neutrality for the Internet. 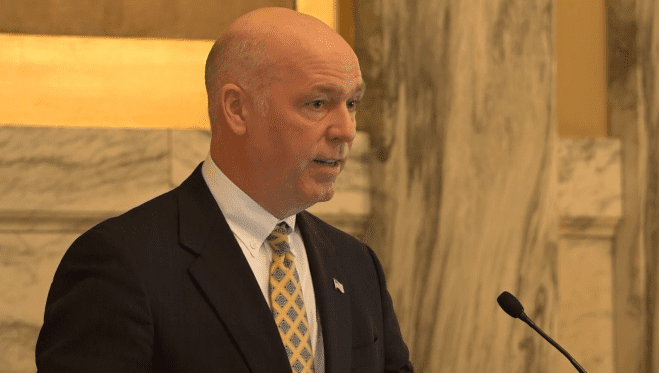 Gianforte, who is running for governor next year, has voted with the president on all but one of 36 key votes in the U.S. House so far this year. That means he has been voting “no” on almost every initiative passed by the Democratic-controlled House — such as a bill last week to raise the federal minimum wage to $15 an hour.

His only key vote against the president was in January, when he supported a bill to block Trump’s plan to lift sanctions on the Putin-affiliated Russian companies. The bill passed 362-53 but failed in the Senate.

Last year, Gianforte voted with Trump on all but three of 36 key House votes identified by 538.com. Those votes were for initiatives supported by the then-Republican majority and the president, such as repealing some banking regulations, the 2018 Farm Bill, opposing a carbon tax, making individual income-tax cuts permanent, funding the border wall, and a host of other measures.

He opposed the president twice on budget bills, voting “no” on measures that ended a government shutdown in February 2018 and on the full 2018 budget bill in March, arguing that they had too much spending.

Gianforte also voted against Trump in January 2018 by supporting an amendment to limit law-enforcement’s ability to search private messages obtained incidentally through the Foreign Intelligence Surveillance Act — but then voted to extend the overall act.