The Montana Department of Public Health & Human Services says the state has seen 14 confirmed cases of the flu across eight counties since September 1, 2018.

DPHHS on Friday released its first weekly summary of the 2018-2019 flu season.

Lewis & Clark County has reported the most cases, with six people confirmed sick with the virus.

Missoula County has had two confirmed cases; one case has been reported in each of the following counties: Cascade, Silver Bow, Gallatin, Big Horn, Roosevelt, and Richland.

Three of the 14 people sickened by the flu have been hospitalized.

Nationwide, the federal Centers for Disease Control & Prevention says that flu activity has been minimal so far.

DPHHS says that influenza is a contagious, upper-respiratory disease caused by different strains of influenza viruses. While many people use the imprecise term “flu” to describe 24 or 48 hour bouts of illness, real influenza can interfere with normal daily activities for as long as a week.

As many as 200,000 Americans are hospitalized because of it each year, and as many as 36,000 die of the disease or complications associated with it.

Children under age 1, adults 65 or older, and people suffering from certain medical conditions are at a higher risk of serious complications.

Health professionals say the best way to protect yourself, your family, and the community is to get vaccinated against the virus. 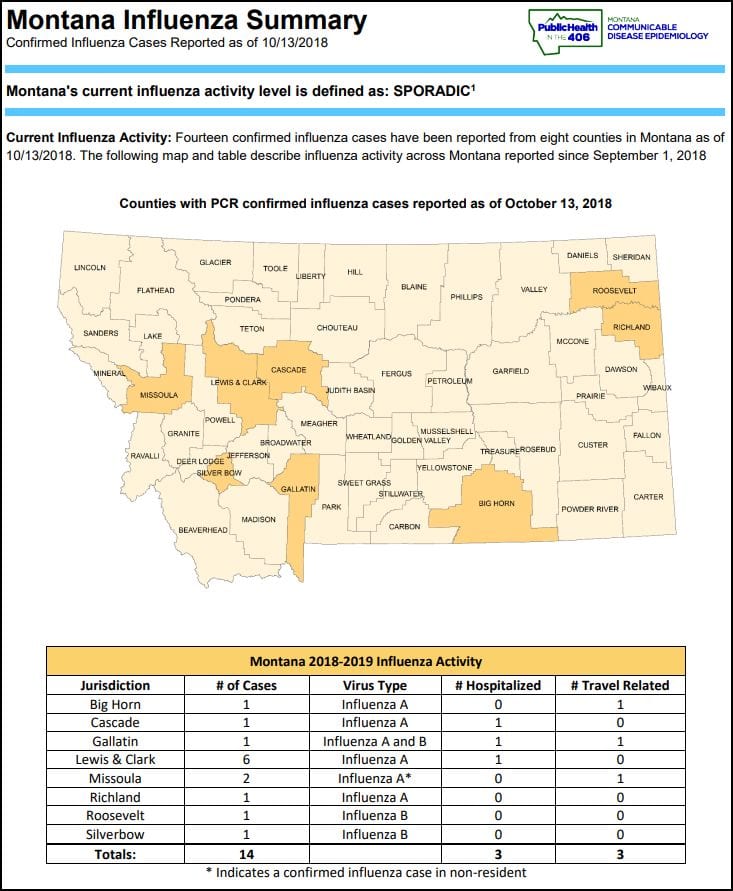