(GREAT FALLS) Malteurop is one of the biggest malting companies in the world. 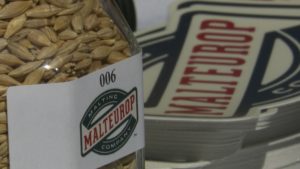 “We have a wide range of customers in terms of size. We have big breweries, big distilleries. But then we have a lot of smaller customers, craft brewers who may just have a brew pub or a taproom much different scale,” Malteurop’s commercial sales director Christopher Seitz said.

Every year, the company hosts Barley Days. It is a weeklong event that gives customers the opportunity to visit local bars, see the barley fields, and tour the Malteurop facility.

“The goal is to connect customers who often times don’t really get to see the raw material they use in their beer or their bourbon. They don’t get to see where its coming from. We’re just trying to make that connection,” Seitz said.

Brewers and distillers from near and far traveled to Great Falls for the event.

“The consumer these days really wants to know where their boots come from, or where their bourbon comes from and how it’s made. If we can make those connections to the grower, that helps our customers, the brewers or distillers, tell a story. Everyone wants a story behind their product,” Seitz said.

“We have a lot of customers from Montana. They want access to Montana-grown barley and Montana-produced malt. It helps them tell a story. When their customers come to them across the bar and say, ‘What’s new? What’s on tap? What do you have for me today?’ They have that ability to say we make our beer with Montana barley,” Seitz said.

Seitz says the week is all about making a connection and building a relationship.

“This industry is all about those personal relationships. It’s what we love about the beer business or Tennessee whiskey business, is that it is about relationships and connections. If we can connect the consumer via a story, if we can connect the producer to the fields and bring our growers together with our customers, again it’s just building that connection,” Seitz said.

Two customers in attendance were representatives from Jim Beam.

Caple, along with distillery supervisor Jason Sosh, traveled from Kentucky. Both represent the Booker Noe Plant.

“It’s nice to actually put a name and a face with a product. When you think about Malteurop, we can go back and put the plant in our brain and have that visual cue that we didn’t have before. The barley, we just thought about the farm. We didn’t imagine the huge processing plant that went with it, which is very impressive. It’s a much larger operation than we thought,” Caple said.

Caple says although technically they are meeting with some of their competitors, it never feels like that. He says it’s important to build connections with others in the industry.

“We got Sam Adams here and rarely would you ever see Jack Daniels and Jim Beam standing in the same place and kind of getting along, but here we do,” Caple joked. “We share a lot of the same stories and we share a lot of the same raw materials. Brewers, distillers, everybody is sharing this crop and this product which is very interesting that we all have that common thread of all basically originating right here in these fields,” Caple said.

“I haven’t met a farmer that doesn’t like to know where his barley is going. If you tell them this is going into a pint of Boston Beer, they get all excited and they go right out, and that’s what they are going to buy when they go to the bar or the liquor store,” Seitz said. “Everyone in this supply chain is proud of what they do. I describe it as the three line of craftsman. The farmer is the first craftsman. The maltster is the second craftsman. The brewer or distiller is the third. If you can connect all three, then that’s magic.”

And although being the minority in the group as distillers, they say they have felt right at home.

“A lot of the same hospitality that we have in Kentucky, we have received here in Great Falls. Everyone has been very, very nice. It’s kind of the same concept that we have, which is come as friends, leave as family,” Caple said. “It was also nice to get out of the humidity in Kentucky. 90 degrees in Kentucky is a whole lot different than here. Your heat wave is very small compared to ours.”

“At Malteurop, we’re very proud of what we do as craftsman of malt. It gives us the opportunity to pound our chest a little bit and bump some knuckles because we are proud of what we are doing here,” Seitz said.