KALISPELL – Three people were injured after their vehicle rolled 40 feet down an embankment in Glacier National Park.

“I was hoping to take a late evening trip to avoid the crowds that accumulate during the day time and was hoping for a nice quiet evening in Glacier Park,” Granrud said. “I came across five Glacier National Park ranger vehicles parked, blocking one side of the road.”

Around 5 p.m. on Monday, a car swerved to avoid another car that had stopped to view a bear on Going-to-the-Sun Road and plummeted 40 feet off the road near Packers’ Roost.

“From there, our folks that are qualified in search and rescue were able to put their harnesses on, put their ropes on and go down the embankment and do an evaluation of the patients in the car,” Alley said.

Three people were transported to the hospital in stable condition.

Granrud, a lifelong Montanan, has visited Glacier National Park his entire life and has never seen anything like the crash. He said he was shocked, but knew he had to capture the moment.

“As a photographer, you want to capture interesting moments, but you also want to make sure that it’s tasteful and make sure everyone is ok,” Granrud told MTN News. 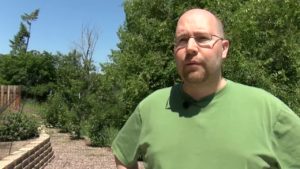 His photo has been shared almost 300 times on Facebook on top of hundreds of comments.

But Alley said even experienced visitors like Granrud need to pay close attention to the road. With almost three million visitors last year, everyone needs to be aware to prevent accidents from happening.

“Defensive driving skills are even more important on the Going-to-the-Sun Road.  So, make sure you’re leaving plenty of space between you and the car in front of you,” Alley advised.

“Plan for the unexpected, you know, if you see a car that looks like they might pull out in front of you, they’re probably going to,” she added.

Alley said it’s not clear yet if speed played a factor in the crash or if the car that went off the road was from out of state.