The WNV season in Montana usually begins in July and ends in October and the best way to prevent mosquito-borne diseases is to protect yourself from mosquito bites. 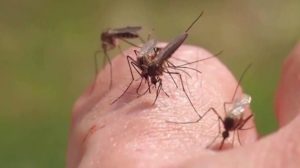 While mosquitoes found in Montana are unable to transmit diseases like Zika virus, they do spread WNV, according to state health officials.

The virus can also infect horses and birds, with birds serving as the source of infection for most mosquitoes who then pass the virus along to humans by biting them.

“As we approach WNV season, we encourage everyone to take the proper precautions to prevent mosquito bites when outdoors,” Department of Public Health and Human Services epidemiologist Erika Baldry said.

Since surveillance began in 2002, the 2018 season was the third highest in terms of the number of WNV cases reported in Montana.

Forty-seven people were diagnosed and reported, including one death last year, which was the 14th WNV-related death in Montana since 2002.

Health officials note humans are not the only ones that can be infected with WNV as 50 Montana horses were also diagnosed in 2018.

When infected with WNV, about 4-out-of-5 people will not have symptoms and will develop immunity after clearing the infection.

Among the 1-in-5 individuals who develop illness, they will generally experience mild symptoms that may include: headache, body aches, joint pain, vomiting, diarrhea, or a rash.

The 4 D’s of West Nile Virus prevention should be followed to reduce the chance of mosquito bites.