“She tells us all the time that he’s her best friend, and he legitimately is,” Jamie McGraw said.

Jamie is talking about a service dog. A dog that gives her daughter, Katie, confidence to go to school, the grocery store, and even to high school prom. 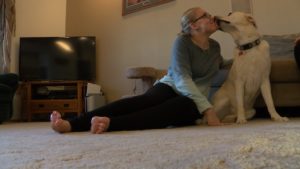 “He provides a communication bridge for her that you couldn’t create otherwise. People genuinely love dogs. To have this creature that people want to come over and meet and say hello to, it provides an opportunity for her to communicate with people she just wouldn’t have otherwise. It’s been really powerful.” McGraw said.

But never did Jamie think dogs like Tommy would be raised in prison.

“If anyone has ever done anything wrong in their life, we’ve all made mistakes, this is their way of giving back,” correctional counselor Susan Kloos said.

Kloos runs a program called Canine Companions for Independence at the Crossroads Correctional Center in Shelby.

“I am very proud of the inmates that do this job. These guys are a part of the program, they do all the work. They have the loyalty towards it, the dedication and the drive,” Kloos said.

“In the correctional environments, it’s a little depressing. You leave your family, you come here. You are limited in what you can do with your actions. These dogs fill that void for them,” Kloos said.

The dogs are brought to the prison when they are eight weeks old. They live in-house with the inmates until they are a year old.

Throughout the year, the dogs can learn up to 40 commands.

“These dogs don’t do tricks, they are doing a job,” Kloos said.

The inmates make $2.25 a day for raising the pups, but Kloos said they don’t do it for the money.

“The pay in prison as you could imagine is not great. The inmates don’t do it for the pay, but it’s one of the better paying jobs,” Kloos said. 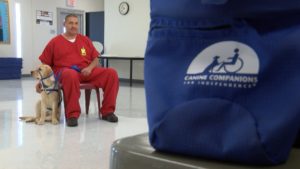 Gary Heavygun was sentenced to life in prison for murder.

He is raising his fourth dog.

“He brightens my day. He’s pretty much my buddy. Me and him go through the day together, go through commands. We do a lot together. We don’t go to chow together. He is pretty much the highlight of my day,” Heavygun said.

He added having a companion in prison is life changing.

“It’s a privilege to have a dog and knowing that I’m giving back to the community by raising Jorge, that’s kind of the key thing,” Heavygun said.

“Prison is not an easy place to live, but with these dogs, it kind of breaks the barrier between you and everyone else,” Reinert said.

Reinert is also serving a life sentence for murder.

The Crossroads Correctional Center has a 79 percent success rate for the Canine Companions for Independence program.

“The people that are raising dogs in that facility, they are giving them 100 percent of their time and attention,” McGraw said.

Once the dogs complete the program in prison, they go off to advance training in California.

Eventually, the dogs will graduate and a ceremonial leash handoff is done, which the inmates watch via video conference.

“It’s not uncommon for us to shed a couple tears, of course quietly in our house, but we’re definitely proud,” Reinert said.

“It’s probably the best thing from getting parole is probably knowing that they graduated,” Heavygun said.

“When you go through a graduation with a dog that comes from the prison, they televise it. I just think that’s really powerful. They can’t be there to hand over the leash,” McGraw said.

CCC is just one of seven prisons across the country volunteering for the program.

“To do that for somebody that you’ve never met is really an ultimate act of unconditional love. I think that’s powerful. It doesn’t matter to me who’s raising them. Someone who is willing to do that for another human being, I say thank you,” McGraw said.