PENNSYLVANIA — A five-year-old girl from Big Sandy, Montana, has been safely located in Pennsylvania, following a two-year search prompted by an abduction carried out by her mother two years ago.

Rearden, also known as Tracy Sibra, has been wanted by the Great Falls Police Department (GFPD) since July 2017 on charges of felony custodial interference, the press release says. GFPD officers were not immediately available Saturday afternoon  for comment. 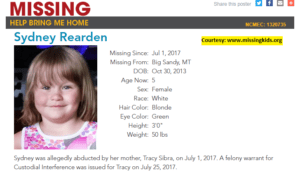 Deputy marshals were given reason Saturday morning to believe that Rearden would be visiting a friend’s residence in a Pennsylvania town with her daughter. The press release details that Rearden was indeed identified at this location, and local officials arrested her without incident.

Rearden was found with her daughter. She was also in possession of two firearms upon arrest that will result in separate charges.

For The Missing: Pacific Northwest, a Facebook page dedicated to helping find missing people across the Northwest U.S., posted about the girl’s disappearance 10 months ago.

Sydney Rearden is missing from Big Sandy, Montana for almost a year. She is believed to be with her non-custodial…

Posted by For The Missing: Pacific Northwest on Friday, May 25, 2018

The 32-year-old woman now awaits extradition to Montana from Chester County Jail, while her daughter resides in the care of Pennsylvania law enforcement until she can be reunited with her father.

This story was first reported by lehighvalleylive.com.

MTN News will continue to provide updates to the aforementioned situation as they become available. This is a developing story.