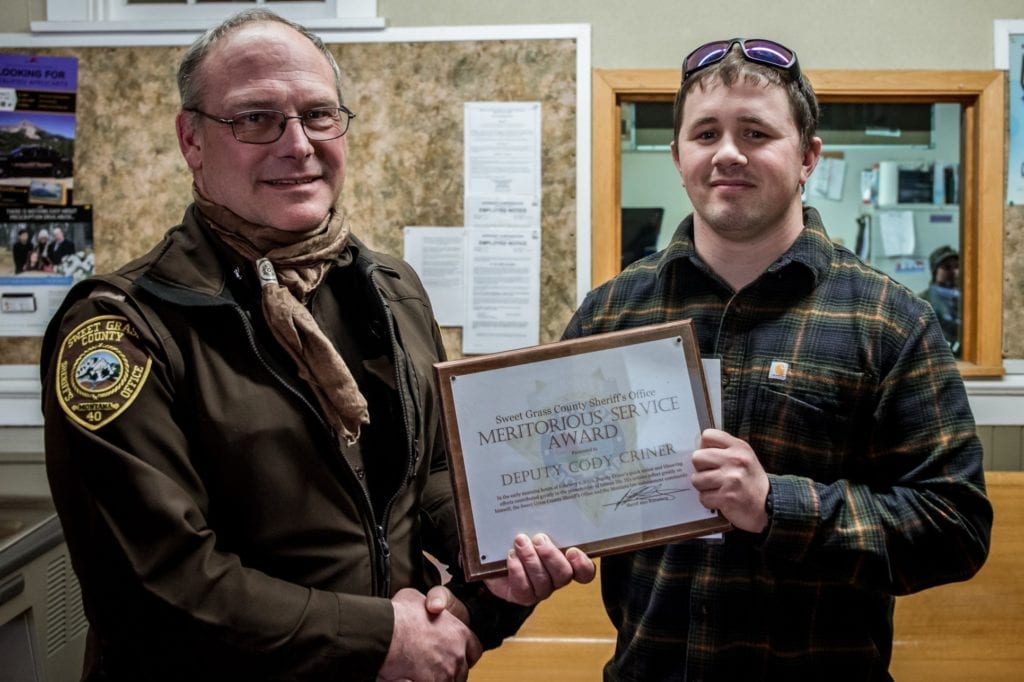 BIG TIMBER – A Sweet Grass County deputy on duty for less than a year has been honored for saving the life of a man who was unconscious and hypothermic.

On Feb. 6, Criner was checking what he thought was an abandoned car at a rest stop on Interstate 90 near Big Timber.

Cars are abandoned in the area all the time, but while out surveying the rest stop, Criner spotted a Toyota Prius and had a gut feeling.

The car was covered in snow, and the hood and the exhaust were frozen over. The car hadn’t been warm for hours.

As Criner moved closer to the car, he spotted the hand of a 33-year-old man. His eyes were rolled into the back of his head and he wasn’t responding as Criner pounded on the window.

The temperatures on that particular day were 10 degrees below freezing.

Sheriff Alan Ronneberg said the man was traveling from Washington state to Florida where his mom lives. He believes the man could have had drugs in his system and was possibly trying to harm himself.

Ronnenberg said Criner used a hammer to bust out a passenger window to give hypothermia care to the man until an ambulance arrived.

The deputies regularly keep emergency blankets in their vehicle, said Ronneberg. Criner covered the unconscious driver with everything he had and even placed the beanie from his own head onto the victim.

Often times, deputies are called to check on dozen of abandoned vehicles each week, but never is there anybody inside.

Ronneberg took the opportunity to give credit to his deputies for the work they do.

As for the man in the car, Ronneberg said they aren’t sure how he’s doing, but he knows he’s getting the care he needs.