His family told MTN he left in the middle of the night and never returned home.

“Nobody’s seen him since, nobody has called,” LaShinta Many Guns, Wayne’s sister, said.

Many Guns is 6 feet tall with a slender build and weighs about 140 lbs.

He has brown eyes and short brown hair.

LaShinta said she is worried about the winter weather while her brother could be out there.

“It’s really, really cold, and it’s been three to four days since I’ve had contact with him,” LasShinta said. “It’s very unusual because he calls me all the time.”

She said Many Guns is enrolled at the Blackfeet Community College and was recently accepted into Montana State.

The family plans to organize a search party in the coming days.

“He’s very nice, smart, educated boy. It’s not like him to disappear like this or not call or come by. It’s really strange,” LaShinta said. 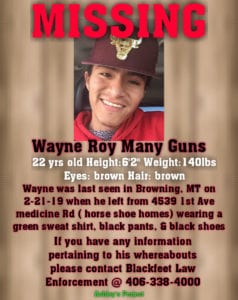 If you know of Many Guns’ whereabouts, you are asked to call the Blackfeet Law Enforcement Services Dispatch center at (406)-338-4000.