New data from the Montana Department of Public Health and Human Services (DPHHS) show significant increases in some sexually transmitted diseases (STDs) in the state.

Gonorrhea cases also rose with 1,183 new cases reported in 2018, a 51 percent increase compared to the previous year. Gonorrhea had previously declined in 2017, but the 2018 numbers brought the projected case count to a 30-year high.

Forty-five cases of syphilis were also reported in 2018 as well as 24 newly diagnosed HIV cases. Sixty-six percent of 2018 syphilis cases were men who have had sex with other men. Sixty-five percent of cases those testing positive for syphilis said they had used social media apps and online sites to meet their partners.

“Sexually transmitted infections (STIs) are, generally speaking, on the rise even in the nation so in Montana we’re not immune to that,” said DPHHS HIV/STD/ Viral Hepatitis Section Supervisor Dana Fejas, M.P.H.

“When a provider diagnoses a patient with an STD like syphilis, gonorrhea or chlamydia, they will report that to the health department,” said Fejas. “Some places have excellent screening practices so we’re of course seeing a lot more cases because we’re screening  the right people.”

Fejas said the best ways of preventing catching a STD is by using protection each time, speaking with your partner about your sexual history or by abstinence.

The CDC recommends anyone who is sexually active to get tested for STDs.

“The CDC does have guidelines about getting tested– so depending on what your activity is you may want to get tested more frequently than other times. The sooner you get in for testing and you find out you have an STI you can get treated, we can help the partner get treated and we can stop transmission to others,” noted Fejas.

According to the CDC, all adults and adolescents from ages 13 to 64 should be tested at least once for HIV. Annual chlamydia and gonorrhea testing is also recommended for all sexually active women younger than 25 years, as well as older women with certain risk factors.

More information and resources regarding STDs are available through the DPHHS website. 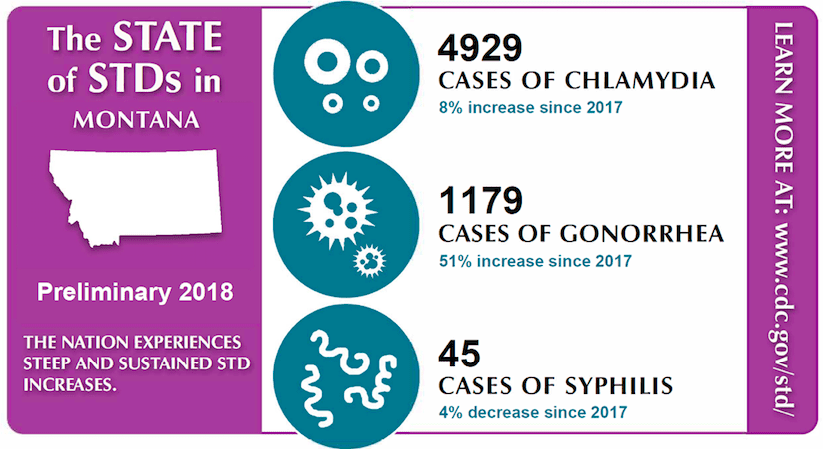