The body found Friday on the Northern Cheyenne Reservation near Lame Deer is said to be that of Henny Scott, a 14-year old girl who was reported missing on December 13th.

Northern Cheyenne Tribe vice-president Conrad Fisher said the body was that of Scott.

Fisher says the body was found covered in snow in an area behind a house in the Muddy Creek area west of Lame Deer.

Scott was a freshman at Lame Deer High School and would have turned 15 in January.

She had been missing for several weeks, and a missing person advisory had been issued last week by the Montana Department of Justice.

A casket escorted by FBI and BIA agents was brought by car to the Muddy Hall community building west of Lame Deer on Saturday morning, where community members had gathered to grieve and support Scott’s family.

FBI spokeswoman Sandra Barker said that the body has not officially been identified and an autopsy will be conducted to determine the cause of death.

The MEPA was issued at the request of Crow BIA Law Enforcement.

The advisory states that Scott is a runaway and was last seen wearing a black Columbia jacket with a gray Nike hoodie and blue jeans.

Henny was last seen in Busby, and may have a physical injury

She may be heading toward Hardin. 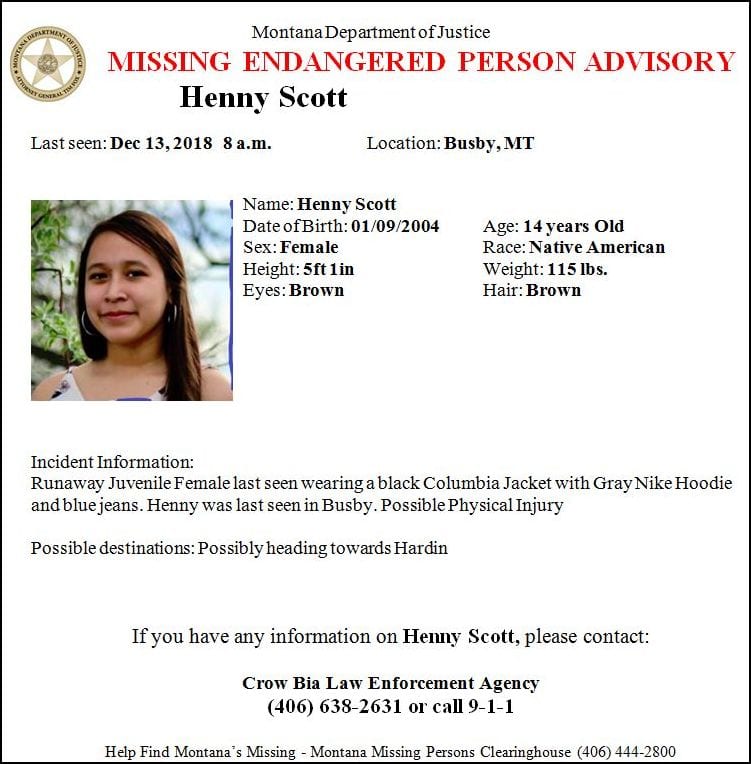