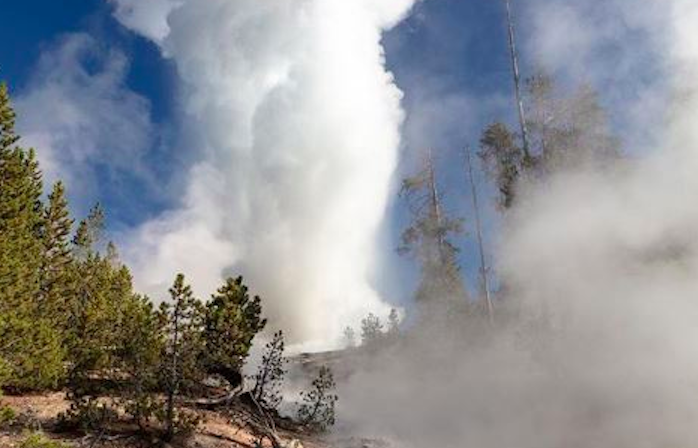 On Saturday at 1:07 a.m., the geyser erupted for the 30th time this year, which broke the previous record of 29 documented eruptions in a single year set in 1964.

A major Steamboat eruption can shoot water 300 feet into the air, is extremely loud, and can deposit muddy water, clay, and stones on the Norris parking lot a quarter mile away.

Steamboat has been the world’s tallest active geyser since 1904.

(May 3, 2018) The notoriously fickle Steamboat Geyser in Yellowstone National Park has erupted three times since March 15th. Before that, it hadn’t erupted since September 2014. So what does it mean?

Steamboat is the tallest active geyser in the world. Even the little eruptions we’ve seen this spring are 10 times the size of a typical Old Faithful blast. That means back in 2014, Steamboat was more than 20 times what you see at Old Faithful.

But Old Faithful got its name for a reason. You can practically set your watch by it. Not so much for Steamboat. After 1911 it went to sleep for 50 years.

Then it slowed back down and eventually took a nine-year rest before shooting skyward again in 1982 and 1983.

So what’s going on? Well, scientists know what heats things up in Yellowstone.

Hank Heasler explained, “A mass of very hot molten rock, moving up towards the surface. As it moves up it starts to break the overlying rock.”

But what exactly causes Steamboat to wake up and go crazy at wild intervals? Scientists simply don’t really know. There are plenty of theories, but as for proof? We’re still waiting for that.

Still, most scientists who are posting about thermal activity in Yellowstone don’t think this is a prelude to a volcanic eruption. They’re not convinced that the dreaded “super volcano” is likely to awaken soon and most say any activity is likely to be small scale.

Sort of. Heasler said, “They may be even as large as a Mount St. Helen’s eruption, or even much smaller than that. Maybe an individual vent that puts out a very nice Hawaiian-type basalt flow.”

In the meantime, enjoy the water and steam show.