BILLINGS – Police destroyed a suspicious tote box and a second device that looked like an explosive Monday night outside the KTVQ studio in downtown Billings.

Both items had been left outside a side entrance of the Q2 main office at 3203 Third Avenue North by an unidentified man earlier that afternoon. Neither of the devices were determined to be actual explosives, no one was evacuated, and no Q2 property was damaged.

Police blocked off North 32nd Street between Third and Fourth Avenue North for about two hours while they brought in their bomb squad. Police deployed a bomb squad robot to detonate the plastic tote first around 8:30 p.m. It contained old clothing, a computer keyboard, and other random assorted items.

The second device was wrapped in electrical tape, wires, and what looked to be batteries and a timer, according to news director Jon Stepanek, who first spoke with the unidentified man and saw the devices.

“We deployed all of the bomb squad robots, and it was able to go up and evaluate and get the device. There were components on the outside of the device that looked like they could be components that you would see consistent with an IED,” Gartner told MTN News.

“With that information, and we also had a shot that we were able to take with our disrupter on our robot, we fired a water shot at the device and disassembled it on site. It’s hard to tell what the intentions are from who made it, but again I think the intentions are to raise alarm and cause people to feel uncomfortable and with recent events that have happened nationwide. It’s hard to tell if that’s what motivated an individual to do something like that or not,” Gartner said.

The incident began at 4:49 p.m., when the man, who was tall, slender, and wearing a black sweatshirt, appeared at the east entrance of the building with the devices. He was approached by Stepanek, who asked him what he was doing.

Stepanek said the man told him “this is for you,” and that no one cared about him. The man then left and walked north on North 32nd Street past the YMCA. Stepanek then called police because he didn’t know what was inside the tote.

Billings police arrived on the scene around 6:30 p.m. and called the bomb squad. When the squad detonated the tote box, employees were directed into the basement and a separate wing of the building for safety.

The detonation of the second device took place in the parking lot north of the building. One Q2 employee was directed to leave his office, while others were watching the operation from the street.

The Bureau of Alcohol, Tobacco and Firearms and the FBI are assisting in the investigation, and the suspect has not been identified.

Both the MTN Nine O’clock News, which is produced by Q2 in Billings, and the Q2 10 o’clock News aired without any disruptions.

In an email to staff, Stepanek thanked the staff for responding in a “responsible manner” through the night.

“It’s important to be aware of our surroundings today.  Keeping our staff safe will always be first.  If you see anything suspicious, say something.  I’m pleased this situation ended how it did.  It gives me a stronger resolve to protect our staff and our mission to report the news,” he wrote. 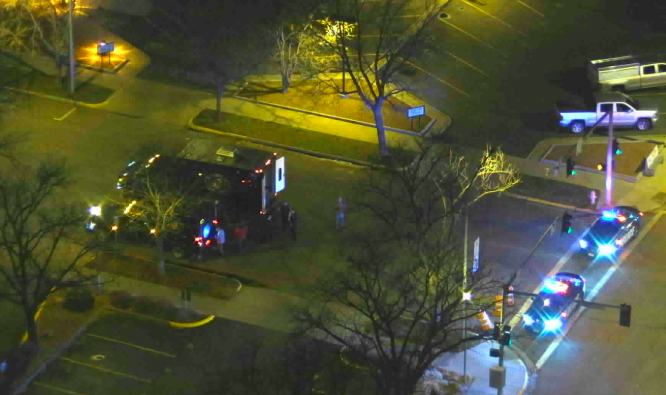 About 4:45 p.m., a man was seen leaving the box on the stoop at the side entrance. He was then observed headed north past the YMCA building.

Just after 8:30 p.m., a Billings Police Department robot was used to remove the tote from the area.

Employees were not evacuated, but told to move downstairs or into a separate wing of the building.

The robot was also used to blow up an item that was inside the box that had flown into the parking lot.

An officer on the scene said the item had wires in it, but police did not say if it was a bomb or explosive device. The item was destroyed without causing damage to anything else.

At 9:45 p.m., the street was no longer blocked, however the bomb squad vehicle remained on scene.