HELENA – A Helena man is left scratching his head after a bizarre occurrence of vehicle theft in which the trunk lid was stolen off a white 1999 Honda Civic.

The trunk lid was the only thing stolen.

On Tuesday, January 22, the man, who wished to remain anonymous, walked outside his downtown home at around 7:45 a.m. to scrape the windows from the morning frost.

When he arrived at the car, the man said he couldn’t believe what he saw.

“It was the most ridiculous thing you’d ever seen,” he recalled. 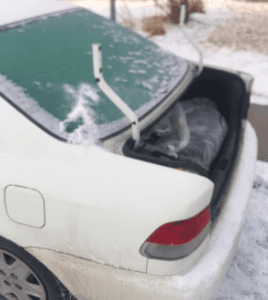 The man said the thief cut a wire that was attached to the trunk lid, disconnected the hinges, and took the trunk lid and the spoiler.

Upon seeing the pilfered coup, the man went back inside and called Helena Police to report the theft.

“The officer pulled up– and I’d like to say her response time was amazing. She got out, looked at it and she turned to me and said ‘Huh… I’ve never seen this before,” noted the man.

The vehicle is not driven often but does have sentimental value to the family having originally belonged to the man’s grandmother.

“My grandmother was so proud of that spoiler. When she went to sell it she said ‘You know it’s not much but is has a spoiler!’” mused the man.

“All of us grandkids drove the vehicle at one time. I used it for my internship in Washington D.C.,” he recalled.

He paid $300 for the vehicle and joked that the snow tires on the car are more valuable than the Honda Civic.

The trunk was locked overnight but the man admitted to leaving the driver’s side door unlocked.

“There was nothing valuable left in the vehicle and we have seen a rash of vehicle theft in Helena. So if the door was unlocked I figured they’d just open it to rummage through the vehicle rather that busting in a window to do it,” he said.

Due to the snow, the man was forced to use a drop cloth from his garage to protect the exposed trunk.

The plan is to keep the vehicle and get new parts to replace the abducted trunk lid.

“I’m going to have to find a new trunk lid I guess– whether it will have a spoiler or not I don’t know,” he laughed. “It will probably cost me more money to replace the trunk lid than to buy the car.

The man also noted his disappointment that this crime even happened. 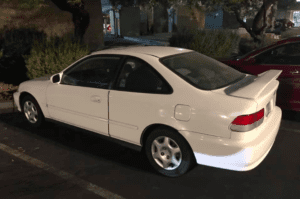 “What really blows me away is this car has been in Maryland, Washington D.C., Las Vegas now in Montana. In all those other high crime areas it was just fine but this happens in Helena, Montana of all places. It’s just disgraceful,” the man stated.

HPD noted that another Honda Civic had a theft of a vehicle part on Tuesday morning as well.

Both cases are actively being investigated.

Any information about the poached trunk lid should be reported to the Helena Police Department at 406-443-2000.

The man noted if the lid is returned, he won’t press any charges.

In a final remark the man said, “Seriously it’s the stupidest thing you’d ever seen. Keep it classy, Helena.”