A ceremony at the Lewis & Clark County Cemetery on Tuesday morning honored those who have passed, but who never found their way to a final resting place.

About 50 people gathered for the “Remember The Forgotten” ceremony.

It honored more than 100 people who have been left unclaimed at the county coroner’s office and at various funeral homes in the Helena Valley following their cremation.

The ceremony included words and music by several different denominations, all with a similar message: that these people may finally rest in peace.

Deacon Bob Fishman of the Cathedral of St. Helena said this as part of this prayer:

“These people have gone to their rest in the peace of Christ.  May the Lord now welcome them to the table of God’s children in heaven.  With faith and hope in eternal life, let us assist them with our prayers.  Because God has chosen to call these people to himself we commit their bodies to the earth, for we are dust and into dust we shall return.”

The sign for the burial site was built by shop students from Augusta High School. Several Augusta students also provided their voices for the National Anthem and Amazing Grace.

“Something happens, unfortunately,” says Mikel Stevenson, director at Anderson Stevenson & Wilke Funeral Home. “We’ve found unclaimed cremains in storage units that have been abandoned and things of that nature, sometimes it’s just someone fell too ill to accomplish a scattering per the person’s request and there other times where within fractured families the connection wasn’t there.”

At one point, there were 153 cremains at various funeral homes around Helena or abandoned at the county coroner’s office.

“You know, to sit on a shelf, some of them since the (19)30’s, is very sad,” says Lewis & Clark County Commissioner Susan Good Geise. “These were human beings at one point.”

The ceremony and this final resting place is the culmination of several years of work. For those involved, it’s something that didn’t come with a road map.

“This is uncharted territory for us,” says Commissioner Goode Geise. “But we’re doing the best we can to make sure these individuals have a respectful place.”

Stevenson added, ”It’s been a couple of years of discussion, or close to a couple years to find the best avenue, along with giving ourselves, the funeral homes and coroner’s office enough time to find out as much information as we can about these people and go from there.”

Some of the cremains were identified and a few made it back to their loved ones. Others were found to be veterans and they were interred at Fort Harrison.

Those who remained, said Good Geise, were not going to be left on the shelf: “I know that it is important to many that people be honored even after they have passed.”

“Our entire goal with it is to make sure that these people that may have been left behind or forgotten that they do have a dignified proper burial,” says Stevenson. 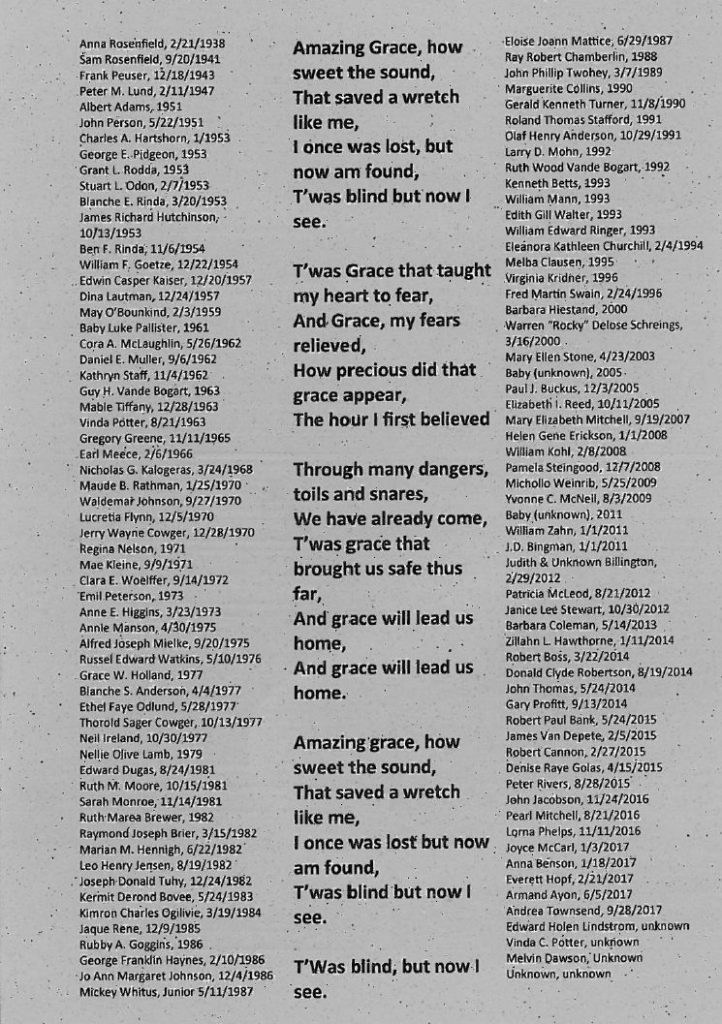