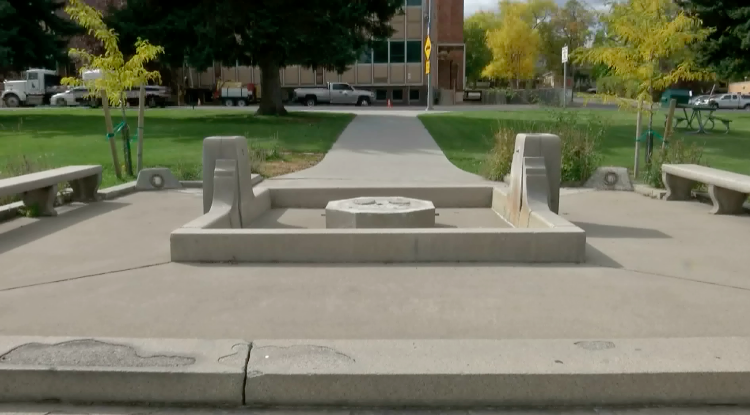 Lewis and Clark County Commissioners were updated Tuesday morning on the status of the Equity Fountain Project.

The fountain is the replacement to the Confederate Memorial Fountain removed from Helena’s Hill Park in August of 2017.

The committee working on the replacement recently displayed at the Holter Museum of Art the four potential designs submitted by artists. They also took public input.

“We’ll take that into consideration, along with the artistic integrity, how it best expresses our ideas of equity and equality and then move forward and select the final design,” he said.

The final design will be announced to the Helena City Commission at their November 5 meeting.

Waterman said one the final design is announced, fundraising will begin to raise the $75,000 needed to build and maintain the fountain.

He hopes the fountain will be unveiled in June or July of 2019.

(August 18, 2017) A fountain designed as a memorial to Confederate soldiers was removed from a Helena park where it stood for decades.

Now, all that remains of the Confederate Memorial Fountain in Hill Park is an empty stone and concrete base.

On Friday morning, city crews began the final preparations for moving the fountain.

By 2 p.m., a crane lifted the largest pieces from the base and placed them on to a trailer.

According to Amy Teegarden, director of Helena Parks and Recreation, the objective was to safely remove the fountain and keep the large pieces intact.

“That’s what we were able to do today,” Teegarden said.

Police set up fences to block people from the fountain while crews worked.

Two people were cited and released by Helena police after they refused to leave the fenced-in area.

One of those arrested was Patricia Sorenson, who said generations of her family brought their children to the fountain to play.

She said it is a part of Helena’s heritage that will now be lost.

“It doesn’t represent hate, it’s a beautiful piece of art donated by little old ladies who collected pennies in milk jars and crocheted doilies to help citizens in this town,” Sorenson said. “It was not given to the city; it was given to the citizens of the city.”

But others came to support the city’s decision.

Brian Miller said Confederate monuments like the fountain cannot be separated from a history of racist movements in the U.S.

“People can still do their marches, their free expression, but cities and municipalities need to do everything they can to send a strong message,” he said.

The fountain was donated in 1916 by the United Daughters of the Confederacy.

It included an inscription saying, “A loving tribute to our Confederate soldiers.”

City commissioners decided to remove the fountain during an administrative meeting on Wednesday.

They cited the possibility that it could become a center for conflict after rallies at a Robert E. Lee monument in Charlottesville, Virginia turned violent last week.

City leaders said they were pleased with how the removal was handled by those on all sides.

“People were able to voice their concerns, their frustrations, but it was all done in a peaceful manner,” Teegarden said.

City Engineer Ryan Leland said the fountain was made of five large pieces, fastened together with grout.

He said the pieces came apart easily with no damage.

They were hauled away Friday afternoon followed by a police escort.

Now the fountain pieces sit in a city warehouse. The city commission will determine in the next few months what will be done with them.

Teegarden said the city will also have to decide what will be done with the empty space in Hill Park.

She said there could be an opportunity to place another piece of public art there.

“We’d like to hear from different community representatives as to some of their ideas of what could be here,” she said. “In the meantime, the site is safe and it will just be an empty foundation until we have a plan.”

Some of the protesters questioned how much taxpayer money Helena would spend to remove the fountain.

Teegarden didn’t have an exact figure on Friday but she said there would only be an extra cost for hiring the crane.

The rest of the work was done by city staff on their regular hours.