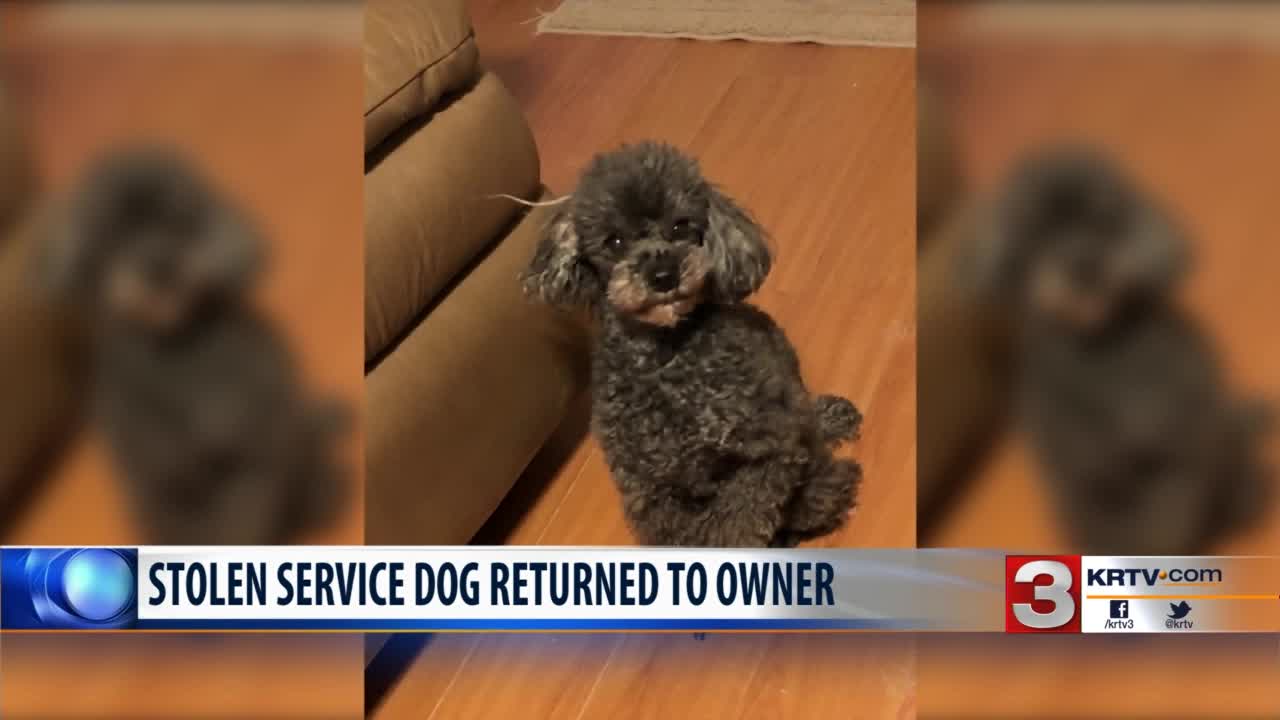 KRTV received word on Thursday morning that Teaha, the service dog that was recently stolen in Great Falls, has been returned to her owner.

Sandy Mahoney's pickup truck was stolen on Central Avenue West in Great Falls nearly two weeks ago, and Teaha was inside the truck at the time.

The truck was recovered in Dillon in southwest Montana a few days later, but there was apparently no sign of Teaha. We do not know if the theft suspect has been identified or arrested.

Yesterday, we learned that Dianne Heikkila and several other people had offered a $750 reward for the safe return of Teaha, knowing how important the service dog is to Sandy.

On Thursday morning, Dianne told us that Teaha is home, reunited with Sandy; at this point, Sandy is not providing details about her dog's safe return.

Dianne noted that the person who returned, or arranged the return, of Teaha wants to remain anonymous, and has refused to accept the reward money.

We will update you if we get more details.

(SEPTEMBER 4, 2019) Great Falls resident Sandy Mahoney said that her truck was stolen from Central Avenue West last Friday, and inside was her dog Teaha. Her truck was found two days ago in Dillon in southwestern Montana and returned to her, but Teaha is still missing.

Teaha is Mahoney’s service dog and helps her out in a variety of ways. Mahoney has a hard time hearing occasionally, and she also is battling cancer.

Teaha weighs about eight pounds and was last seen wearing a pink collar. She does have a chip in her, so if she is brought to an animal shelter or veterinarian, they will be able to identify her and return her home.

Teaha hasn’t been seen since Friday, and Mahoney hopes that the public will help her out and answer the call. “I’m in hopes that people will see the pictures of her and be able to get her back to me,” she said. “I know there’s posts all over Facebook and Craigslist because we’ve been trying to find her. I think there’s avenues out there for them to get her back to me.”

Mahoney also noted that the bond that a person and their service dog share is even more special than an ordinary pet, saying that an animal like that is “irreplaceable.”

“When you have a service animal like that, you get a connection just like you would with a family member,” she explained. “She has been very helpful to me and she is emotionally supportive. You’ve never seen a dog like that. She spends every minute with us and goes everywhere with us.”

In her Facebook post, Mahoney pleaded: "PLEASE DONT HURT HER. PLEASE RETURN HER. She keeps me going and I love her so much."

The family asks that if you find Teaha or if you have any information regarding her whereabouts, call the Great Falls Animal Shelter (406-454-2276) or a veterinarian.