A former Lewis and Clark County Sheriff’s deputy has entered into a plea agreement for sex abuse charges. 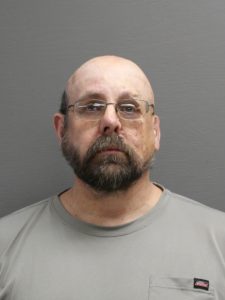 The contents of the plea agreement are sealed until sentencing.

The government’s order of proof states law enforcement received a tip Wolfe was taking nude photos of an underage victim.

During an interview with authorities, the victim said Wolfe used a camera and uploaded the photos to his computer. Wolfe’s home was searched in June of 2017 and several electronic items were taken.

The Rocky Mountain Information Network examined the devices and found child pornography under the user profile of Virgil Wolfe.

Wolfe’s sentencing was set for August 29 at the federal courthouse in Helena. He remains in custody.

(April 10, 2019) The charges against Virgil Allen Wolfe in Cascade County District Court have been dismissed and he now faces charges in federal court.

Courtesy: Cascade County Detention Center
Wolfe, a former Lewis and Clark County sheriff’s deputy, pleaded not guilty to three counts of sexual exploitation of a child and denied allegations of forfeiture during his federal arraignment Tuesday.

Court documents state that over several years, Wolfe persuaded a victim to engage in sexual conduct. He then produced sexually explicit materials that were distributed across state lines, according to court documents.

The forfeiture allegation means Wolfe must forfeit a computer tower and hard drive, a camera, and a memory card to the government if convicted.

Wolfe was first arrested in February and initially charged with 80 counts of sexual abuse of children.

He was a deputy for the Lewis and Clark County Sheriff’s Office in the late 1990s.

His trial has been set for May 28 in Helena.