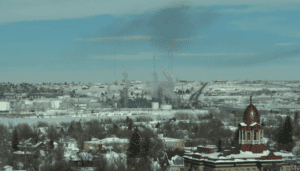 Calumet has issued a statement concerning the reported explosion and possible fire at the refinery in Great Falls.

Here is the complete statement from Calumet:

Calumet Montana Refining has confirmed an incident has occurred at their plant. At this time all plant personnel have been accounted for and there are no injuries to report. A perimeter has been established around the plant, and this includes some interruption to traffic. The cause of the incident is under investigation. Calumet’s top priority is the safety of plant staff and the community. Updates will be provided as they are available.

The shelters in place at Sacajawea Elementary School and North Middle School have been lifted. Bus delays are expected. Parents who are picking up their kids from the schools are asked to come in from the west or north.

Some roads around the refinery are still closed at this time. The 15th Street bridge is open in both directions, however, and drivers are asked to use caution while driving in the area.

Road blocks have been lifted on the Old Havre Highway and 25th Avenue NE.

Air quality experts have determined the air to be safe in the vicinity of the refinery.

We have a reporter at the scene and will update you when we get more information.

UPDATE 1:42 PM: Great Falls Police say all roads in the vicinity of Calumet Refinery have been closed.

A large plume of black smoke could be seen at the refinery.

Police say North Middle School and Sacajawea Schools have implemented a Shelter in Place procedure. People and businesses in the area advised to do the same, including keeping windows and doors closed.

The Montana Club and Mount View Co-op are among the businesses evacuated.

GREAT FALLS- Crews are responding to an incident at the refinery in Great Falls.

Great Falls police are shutting traffic down around the area.

Drivers are asked to avoid the 1900 10th Street S. area around the refinery.

Buildings around the refinery are being evacuated at this time.

We have a reporter on the way. We will update you as soon as we get information.