Garcia is a Thomas Carnival worker who has been accused of sexually assaulting four females while he was on the job as a ride operator at the Montana State Fair several days ago.

Garcia pleaded not guilty to the two misdemeanor counts on August 3rd.

Court documents filed on August 10th allege that Garcia sexually assaulted a total of four females between July 30 and August 1.

Two of the females were under the age of 14, and in all four cases, the females allege that Garcia deliberately touched them on or near their vagina as he was checking their seatbelts on the Speedway ride.

(AUGUST 2, 2018) Roberto Salaman Garcia, a Thomas Carnival employee, has been charged with sexually assaulting two women at the Montana State Fair. He was arrested on Monday after the first incident was reported, and arrested again on Thursday after a second allegation was made.

Katie Cunningham, the first victim (who agreed to be named in this case), told officers that she and her daughter were sitting in a car in the "Speedway" ride, and she had already buckled their lap seatbelt and adjusted the tension. The buckle connected on the far side of her daughter, who was seated to the Cunningham’s left.

The woman said that Garcia came to their car and tightened their seatbelt; while doing so, according to Cunningham, Garcia placed his finger directly on her vagina outside of her pants, according to the charging document.

Cunningham told the officer that there "was no way it was an accident," and explained that in order to come in contact with her vagina, Garcia had to leave the belt loose and reach downward.

Details of the second incident have not yet been released.

John Hanschen, the president of Thomas Carnival, provided KRTV with the following statement:

Thomas Carnival, Inc. operates the carnival midway attractions at the Montana State Fair in Great Falls. The safety and comfort of our patrons is upmost priority. The carnival is staffed by approximately 200 workers. The worker involved in the complaint has worked here for 2 seasons and we have had no complaints or issues with him. His home is Mexico and he possesses a visa to work in the United States. We are continuing to cooperate with the Sheriff’s department as they continue their investigation.

Garcia is charged with two counts of misdemeanor sexual assault.

Garcia has been barred from the grounds of Montana ExpoPark, and he can not leave Cascade County. 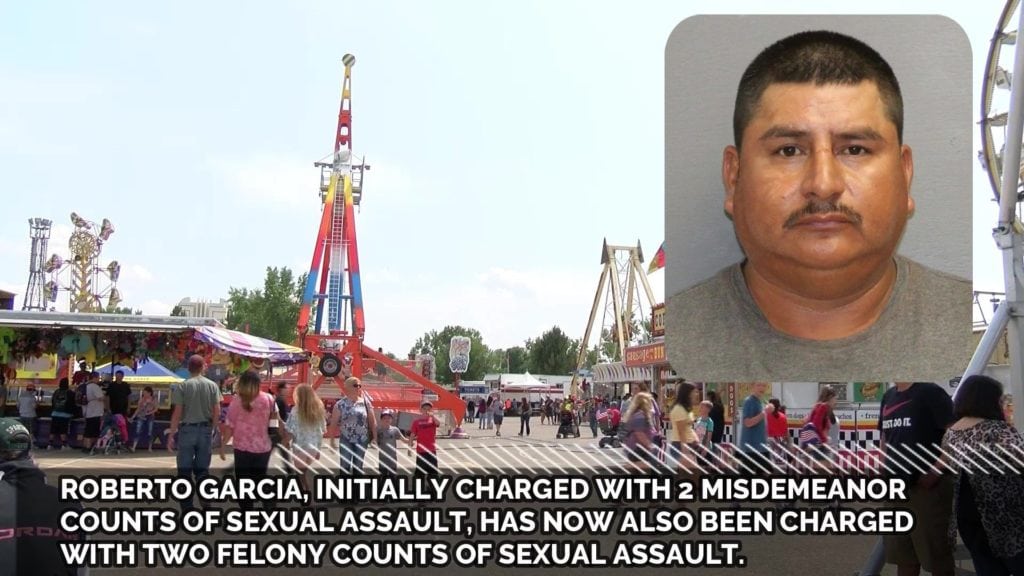