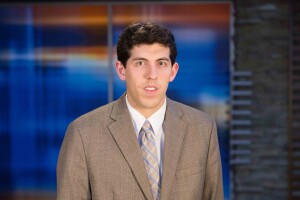 Jonathon Ambarian grew up in a small town in the mountains of Southern California. In 2009, he decided to attend the University of Montana in Missoula, where he studied broadcast journalism and Spanish. He’s a proud UM graduate and Griz fan.

Jonathon first came to Helena in 2013, covering the Montana Legislature for broadcasters around the state as part of UM’s Legislative News Service. After the session ended, he stayed through the summer, reporting and anchoring the news on KBLL Radio.

Jonathon moved to Yakima, Wash. in 2014, and worked for two years at KIMA-TV, first managing the station’s website and social media, then producing the evening newscasts. Then, in 2016, he was excited to receive the opportunity to become a reporter with the Montana Television Network in Helena, returning to a state and community he’s come to love.

Jonathon has always been fascinated by the news and current events. Now, he’s proud to bring viewers in Helena stories about the issues that affect them, whether in state and local government, schools or elsewhere in the community.

When he isn’t working, Jonathon spends as much time as he can hiking, riding his bike and traveling around the state to experience all Montana has to offer.